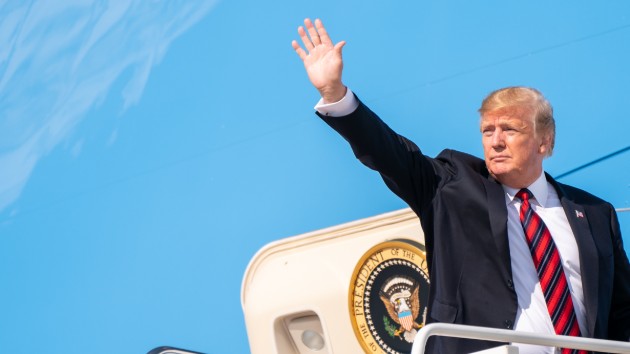 Official White House Photo by Shealah Craighead
Posted on May 20, 2019 by ABC News

(WASHINGTON) — President Donald Trump will hold a campaign rally in Pennsylvania Monday, just days after former Vice President Joe Biden officially kicked off his presidential bid as both make a play for a critical state. For Trump, Pennsylvania holds weight: The state was crucial to the president’s 2016 victory, and it again will be for his reelection hopes. The president pulled off a narrow victory in Pennsylvania in 2016, becoming the first Republican to win the state in nearly two decades. The president intends to rally his base in Montoursville, representative of a red county that voted overwhelmingly for the president in 2016. “President Trump will be returning to Pennsylvania to share his long litany of achievements on behalf of the American people,” said Michael Glassner, chief operating officer of the president’s reelection campaign.The president is expected to tout the economy, a message that will likely be embraced by voters in a state experiencing record low unemployment. Pennsylvania unemployment dropped 3.8 percent in April to the lowest level since 1976. The state’s unemployment numbers are largely reflective of the declining unemployment rate throughout the country, frequently championed by the president at both the White House and on the campaign trail.But despite a booming economy and his previous upset victory, Trump’s campaign follows Republican defeats in the 2018 midterms. Democrats clenched key statewide races including the U.S. Senate and the gubernatorial race. A year prior, Democrat Conor Lamb claimed victory in a special House election by captivating voters in the heart of Trump territory, a district the president won in 2016.As Republicans acknowledge warning signs ahead of the 2020 election, Democrats hope to capitalize on the momentum. Just a few hours away from where Trump will address his supporters in Montoursville, voters in Philadelphia received a rival pitch from a former vice president who hopes to challenge Trump.”If the American people want a president to add to our division, to lead with a clenched fist, closed hand and a hard heart, to demonize the opponents and spew hatred — they don’t need me. They’ve got President Donald Trump,” Joe Biden told a crowd during his campaign kickoff speech in his home state of Pennsylvania.”I am running to offer our country — Democrats, Republicans and independents — a different path,” Biden continued.The former vice president also claimed the Trump administration “inherited an economy from Obama-Biden administration.””That was given to him. Just like he inherited everything else in his life,” Biden said.Trump went on a Twitter spree earlier this month in an attempt to show he has support from firefighters after Biden netted a key endorsement from one of the nation’s largest firefighter unions. The pair have exchanged sharp words, with Biden calling Trump the “Divider-in-Chief” and the president labeling Biden “sleepy creepy Joe” following allegations of sexual misconduct against the former vice president.The state’s Republican party released a statement in response to Biden’s campaign announcement calling his campaign one that “seeks to paint over the failures of the Obama-Biden years and his record as U.S. senator while offering nothing but a continuation of those failed policies.”Copyright © 2019, ABC Radio. All rights reserved.