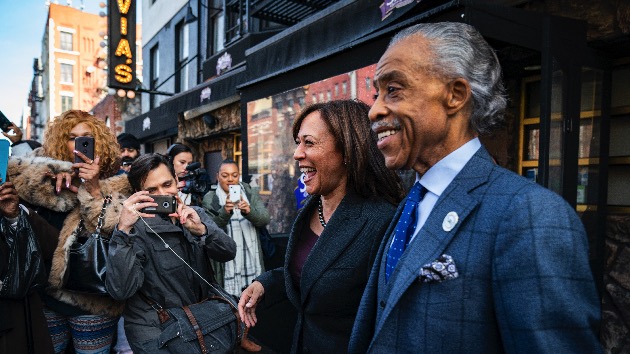 Drew Angerer/Getty Images
Posted on May 20, 2019 by ABC News

(LOS ANGELES) — Democratic presidential candidate Kamala Harris drew a crowd of thousands on Sunday afternoon in her home state of California at a rally at Los Angeles Southwest College – a place where she hopes to make deeper inroads with black voters.The school is located in the heart of South Los Angeles and has one of the highest percentages of black students out of all the city’s community colleges. Harris’ speech also took place in a state that awards more than 400 Democratic delegates during the presidential primary.During her speech, Harris touched on a proposal – unveiled Monday – to close the gender pay gap – and hold corporations accountable if they don’t comply.The plan would make large companies pay a fine if they don’t obtain an “equal pay certification” from the Equal Employment Opportunity Commission. A senior campaign official says for every 1 percent wage gap that exists, the company would be fined 1 percent of its profits. They will additionally be required to post on their company’s website if they are certified with paying men and women equally.”It is a proposal to address the reality of pay inequity and the disparity of pay based on gender. Women are paid on average 80 cents to the dollar for the exact same work as men,” Harris told reporters after the event. “Black women are paid 61 cents on the dollar. Latinas are paid 53 cents on the dollar. And this has real implications not just for those women but for their families and for their communities and for society…These statistics and their disparities have not much changed over the decades in spite of all the talk of how we need to address the obvious unfairness of it.”African American voters are critical to gaining traction in the presidential primary, and the largely Democratic group is expected to make up 12.5 percent of the electorate in 2020, according to the Pew Research Center. In South Carolina, the first state to hold a primary in the South, African Americans make up nearly 30 percent of the population.”Black voters will play a disproportionate role with helping select the Democratic Party nominee for president,” Andra Gillespie, associate professor of political science at Emory University, told ABC News in April. She added that African Americans are the most “loyal Democratic voting bloc in the United States.”Part of the voting process for many black voters will be deciding if a candidate’s policies will benefit the community. Many black progressives have raised concern about Harris’ previous positions on issues like criminal justice and financial reform.As California’s former attorney general, Harris had a record of backing tough penalties for the parents of truant kids — a position she later said she regretted — and opposing federal oversight of California’s prisons.Critics of Harris say her decisions as a long-time prosecutor do not align with the progressive values of the party.While Harris personally opposes the death penalty, she defended it as California’s attorney general in 2014. She also won a $25 billion settlement for California homeowners hit by the foreclosure crisis, but drew criticism when she did not prosecute Steven Mnuchin’s OneWest Bank for foreclosure violations in 2013.To help counter some of these criticisms, Harris has focused on appealing directly to black voters, lunching with Rev. Al Sharpton and speaking to the nation’s largest NAACP chapter in Detroit.In South Carolina, the senator spoke to over 3,000 black women at a sorority event for Alpha Kappa Alpha Inc., a historic African American organization which she joined as a college student at Howard University.Historically black colleges and universities, such as Howard, have been at the center of Harris’ campaign. She chose the campus to host a press conference shortly after announcing her bid for president.”Howard University is one of the most important aspects of my life. And it is where I first ran for my first elected office,” Harris told reporters.Aimee Allison, founder of She the People, a political organization for women of color, told ABC News that candidates who can successfully reach out to the black community and black women voters will be much more competitive.”The campaign trail is littered with people who recognize too late who the most valuable voters in the coalition are,” Allison said. Copyright © 2019, ABC Radio. All rights reserved.