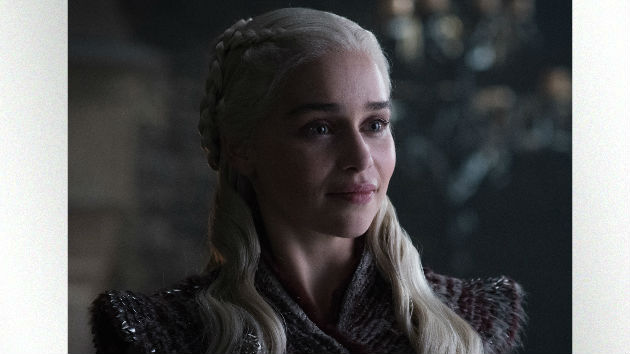 (LOS ANGELES) — While many Game of Thrones fans are still upset with the unexpected turn that Emilia Clarke’s character Daenerys Targaryen took during the show’s eighth and final season, the actress says she’s only really concerned about one person’s opinion: Queen Bey.

In an interview with The New Yorker, Clarke revealed that she met Beyoncé earlier this year at Jay-Z’s Oscars after-party at the Chateau Marmont. During the event, Clarke said Bey came up to her to confess her love for the Mother of Dragons, calling Clarke “brilliant.”

During that moment, however, Clarke felt conflicted, considering she knew her character would soon go on a genocidal rampage, killing the citizens of King’s Landing with dragon fire.

“All I wanted to scream was ‘Please, please still like me even though my character turns into a mass-killing dictator!’” she said. “‘Please still think that I’m representing women in a really fabulous way."”

As for her character’s dramatic shift? Clarke says she could understand why Daenerys decided to go rogue.

“We all have that thing,” she said. “Whether it’s binging on chocolate or drinking seventeen bottles of wine or having an affair.”

Biden to pitch an eight-year pathway to citizenship in day one immigration reform bill
FBI probes whether Capitol assault suspect tried to sell Pelosi computer to Russia
Trump clemency list expected to include Lil Wayne and a once powerful NY politician
Dems aim to address Biden priorities as Senate returns with impeachment trial looming
Residents asked to shelter in place in parts of Poconos after multiple shootings
‘The Bachelor’ recap: A night of drama ends with a shocking departure