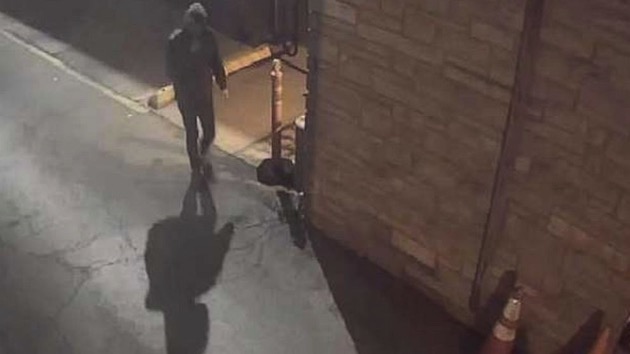 Surveillance video of a man who attempted to start a fire at a synagogue in Chicago, May 19, 2019. (Chicago Police Department)
Posted on May 20, 2019 by ABC News

(CHICAGO) — Police are searching for a man who left a Molotov cocktail at a Chicago synagogue in an apparent arson attempt, authorities said.The crime took place at the Anshe Sholom B’nai Israel Congregation in Chicago’s Lake View East neighborhood this weekend, according to the Chicago Police Department.Three broken glass bottles with unknown substances inside and charred black cloth towels were found at the scene, said police.No one was hurt and no buildings were damaged, police said.”Someone attempted to violate the sacred space that serves as the beating heart of our vibrant community,” rabbi David Wolkenfeld wrote in a letter to the congregation on Facebook. “Our response must be to rededicate ourselves to honoring the sanctity of our shul… we will stand together and support one another when we are frightened or in need of help.”Officers are also searching for a separate suspect wanted in for smashing three car windows outside of synagogues in the Rogers Park District this weekend, Chicago police spokesman Anthony Guglielmi said.In the wake of both crimes, Chicago Police Deputy Superintendent Anthony Riccio has ordered special attention at all Jewish schools, synagogues and businesses, Guglielmi tweeted on Sunday.

Rabbi Wolkenfeld said in his letter, “The police are not aware of any specific threat targeting our building or community. Nonetheless, over a period of many years, we have implemented a proactive security culture of constant improvement.””Our security team is in regular and ongoing contact with local police, security professionals at neighboring congregations and with security consultants at local and national Jewish agencies,” he said.The United States had seen a decline in expression of anti-Semitism over the past several decades until three to four years ago, when it started to rise, according to John Cohen, a former acting undersecretary at the Department of Homeland Security (DHS) and current ABC News contributor.Of the 1,749 victims of anti-religious hate crimes in 2017, 58.1 percent were victims of crimes motivated by the perpetrators’ anti-Jewish bias, according to statistics from the FBI.The Anti-Defamation League recorded a total of 1,879 anti-Semitic incidents across the country in 2018, the third-highest year on record since the Jewish organization began tracking such data in the 1970s.The rise in anti-Semitic expressions spans from harassment to vandalism to assault to murder to mass murder and “seems to be coinciding with a rise in public expressions of white supremacy,” Cohen told ABC News in March.”The themes promoted by white supremacist leaders and the language they use has now been promoted into mainstream political discourse,” Cohen said. “[When] racist, mentally unwell, violence-prone individuals hear our elected officials promoting the ideological themes of white supremacy and anti-Semitism, then that serves to empower those people to action,” he said.Anyone with information about the Chicago arson attempt is asked to call police at 312-746-7618.The suspect in the arson attempt “appears to be a male with a light skinned complexion, wearing a black jacket with a hoodie, black pants and black shoes and carrying a black bag,” said police.Copyright © 2019, ABC Radio. All rights reserved.