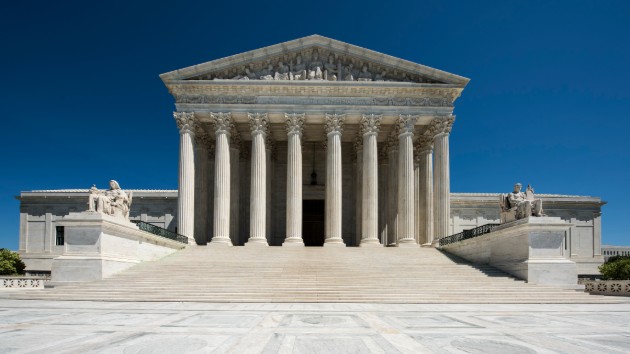 (WASHINGTON) — It’s decision time at the Supreme Court. After months of hearing oral arguments in dozens of cases, the justices convene Monday — and for the five Mondays thereafter, through June 24 — to release their final opinions of the term. They are also expected to weigh in on several petitions to the court by plaintiffs seeking appeals involving DACA, abortion and same-sex discrimination. The court will choose whether or not to take up those issues in the fall term.Here are several of the cases ABC News has been following and which will be decided in the next few weeks:Indian reservation boundaries and the death penalty — Carpenter v. MurphyDid Congress effectively disestablish the Creek Nation Indian reservation in Oklahoma or are its boundaries still in effect? The outcome could determine whether Patrick Murphy, a member of the Creek Nation sitting on the state’s death row, will be executed or head back to federal court for a new trial.Double jeopardy — Gamble v. U.S.Can a state and the federal government each prosecute you for the exact same crime? Should the so-called “separate sovereigns” exception to the Constitution’s ban on double jeopardy continue? The case has potential implications for the pardon power of the American president.Osteoporosis drug Fosamax and dangerous bone fractures — Merck v. AlbrechtCan a class-action lawsuit proceed against drug maker Merck over debilitating osteoporosis drug side-effects? Or, did an FDA decision to block a proposed warning label for the drug preempt state tort claims? Hundreds of Fosamax users have been impacted and the decision could set a precedent for future drug-harm claims.Native American hunting rights — Herrera v. WyomingCan members of the Crow Tribe hunt on federal land under an 1868 treaty or did creation of the state of Wyoming and the Bighorn National Forest negate those terms? Clayvin Herrera was fined more than $8,000 for hunting elk in the forest. He says the treaty protects him, but the state says his rights ceased to exist.Alcohol sales and state regulations — Tennessee Wine & Spirits Retailers Association v. BlairSince the end of Prohibition, the sale of alcohol in the U.S. has been regulated almost exclusively by state and local governments. But when do those regulations go too far? The court will decide whether Tennessee’s strict residency requirements for retailers of beer, wine and liquor are constitutional. It’s the biggest 21st Amendment case in a generation.Cross-shaped war memorials — American Legion v. American HumanistsWhen can religious symbols be placed on public land and maintained with taxpayer dollars? This case will decide the fate of a 40-foot, 16-ton Latin cross in Bladensburg, Maryland, and could impact millions of other crosses on U.S. government property. The justices could also clear up years of varied and inconsistent decisions on the religious Establishment Clause of the First Amendment.Racial gerrymandering — Virginia House of Delegates v. Bethune HillWhen is the use of race as a factor in drawing state congressional districts unconstitutional? The court will weigh in on the balancing act state legislators face under the Voting Rights Act, which requires that race be a factor in redistricting, and the 14th Amendment, which prohibits use of race to restrict the rights of a minority group.Race and jury selection — Flowers v. MississippiCurtis Flowers — an African American man convicted of murder — says a Mississippi prosecutor deprived him of a fair trial and sentenced him to death by eliminating virtually all black people from jury pools in his case. After mistrials and retrials, Flowers has faced not one but an unprecedented six separate juries for the same crime. He insists he’s innocent and wants an unprecedented seventh trial to try to clear his name.Partisan gerrymandering — Rucho v. Common Cause; Lamone v. BenisekThe Supreme Court has consistently agreed that “extreme” partisan gerrymandering — the drawing of electoral maps to the advantage of one party over another — is inconsistent with democratic principles. But many justices, past and present, have suggested that the issue is better left to the political system to sort out. Will the justices finally set a clear, new standard for what is constitutional and what is not?Profanity and trademarks — Iancu v. BrunettiAre words like “FUCT” eligible for trademark registration because of First Amendment protection of free speech — or is there a legitimate public interest in keeping the government disassociated from profane language?2020 Census citizenship question — Department of Commerce v. New York, et alDid Commerce Secretary Wilbur Ross violate the Administrative Procedures Act in moving to add a citizenship question to the 2020 Census? Lower courts have said he acted illegally in an “arbitrary and capricious” manner, striking down the question. The justices will also consider if a citizenship question is itself constitutional, or whether it would so hamper an accurate count as to violate the Enumeration Clause.Copyright © 2019, ABC Radio. All rights reserved.