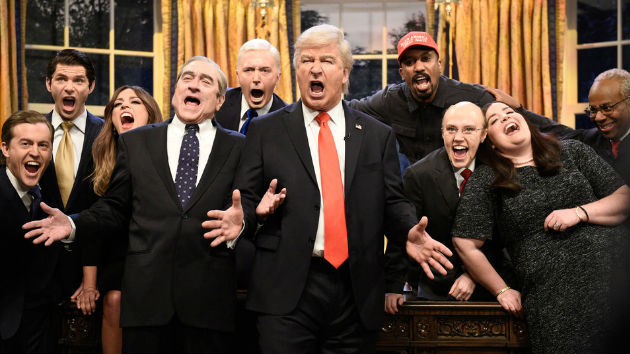 Baldwin introduced the musical number by announcing, “I’m very excited about summer, getting in those things that I never have time for — golf, visiting friends in prison, and enjoying all the fantastic new tariffs.”

“It’s been an incredible year for our economy, it’s on fire,” he continued. “I’m on cruise control for a second term and there’s nothing the Democrats in Congress can do about it.”

The faux president opens the song with “Tonight, I’m gonna have myself a real good time.”

In a callback to Kanye West’s famous SNL meltdown that ended the season opener, cast member Chris Redd, wearing a red MAGA hat, stepped in as the rapper.

Robert De Niro’s Robert Mueller briefly steps in with a “very important” massage for the American people, only to be abruptly cut off by Baldwin’s Trump, who yells, “No collusion!”

In a nod to Sunday’s Game of Thrones finale, Baldwin closes the sketch with “Tune in next season to see who lives and who dies.”

Mark Ruffalo and Robert Downey Jr. have an issue with Chris Pratt being dubbed the worst Chris in Hollywood
Peta Murgatroyd reveals she pulled three ribs during ‘Dancing with the Stars’
International Pronouns Day: What to know about using pronouns
Pregnant woman ran a mile in less than 6 minutes a week before her due date
Trump trailing behind Biden in funding, weeks before Election Day, new filings show
Coronavirus updates: Trump says ‘not much’ he’d change about COVID response