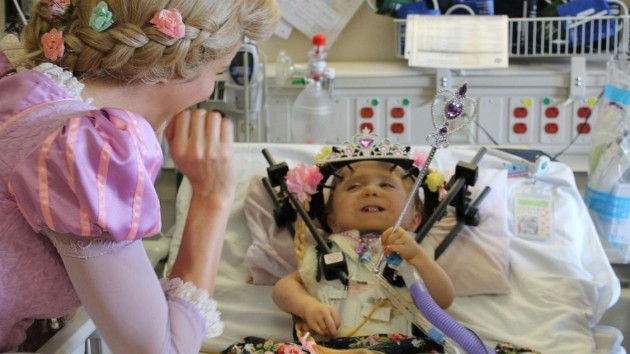 (SEATTLE) — Emma Krall has spent much of the first 23 months of her life in a hospital. The Seattle, Washington, toddler was born nine weeks premature on June 20, 2017, and spent the next eight months in the hospital.She was born with campomelic dysplasia, a potentially life-threatening disorder that affects development of the skeleton, reproductive system and other parts of the body, according to the National Institutes of Health. Emma returned to Seattle Children’s in March, six weeks before she underwent major spinal surgery. She spent her time in the hospital before surgery in halo-gravity traction in order to stabilize her spinal cord and prevent her from becoming paralyzed, according to her pediatric neurosurgeon, Dr. Samuel Browd.The Disney princess-obsessed toddler passed the time at the hospital by watching Disney movies and dreaming of princesses, according to her mother, Rachel Krall. “We watch Disney movies all the time at our house and the hospital,” said Krall, noting Emma especially loves Tangled and The Little Mermaid. “Emma has always loved flowers and pink and really anything girly.”Emma then underwent a nearly five-hour spinal surgery last month. During her recovery, her mom and nurses decorated her halo with flowers and a paper crown. When she was finally strong enough to leave Seattle Children’s in May, her doctors and nurses gave her a send-off worthy of a princess.In fact, they brought in Rapunzel from the Disney movie Tangled to surprise Emma in her hospital room. “Her reaction to Rapunzel coming through the door was kind of, ‘Whoa, who is this girl?,’ and then she really had fun,” Krall said of Emma, who cannot talk due to a tracheostomy tube. “She played peek-a-boo with her and counted, and those are her two favorite things.”Then, Emma’s entire medical team of doctors and nurses arrived in her room wearing tiaras and carrying magic wands themselves. “It was definitely the first time I’ve had a tiara on, but we’ve done some fun stuff for kids over the years,” said Browd. “That’s what really special about children’s hospitals, the ability to think of them as kids instead of just patients and to create some fun for them under what are really trying circumstances.”Emma’s pediatric orthopaedic surgeon, Dr. Klane White, said special moments of fun like the princess surprise they created for Emma are more important to a patient’s recovery than most people realize.”I’ve spent my entire career devoted to taking care of kids who have chronic, life-threatening diseases and these types of acts, they add up and they make a big difference,” he said. “For Emma and her family, it’s just some recognition of what they’ve been through and what they have ahead.” Krall, who has been by her only child’s side for every moment of her treatment, described the surprise princess send-off as “a really sweet moment.” “It was really touching that they had thought so much about Emma and wanted to give back to her in a certain way, with princesses,” she said. “It was a touching and humbling experience and I just hope Emma has given joy to others too.” Disney is the parent company of ABC News.

15-year-old girl missing from Falls Creek after running away
COVID-19 Update: 4,980 hospitalized currently in PA, 1,013 in ICU
‘WandaVision’ debuts today on Disney+
DC police officers speak out after US Capitol siege: ‘I thought … I might die’
NY passenger bus hangs off overpass in the Bronx after crash, at least 8 left injured
Joe Biden to shore up Affordable Care Act after Trump assault on health law