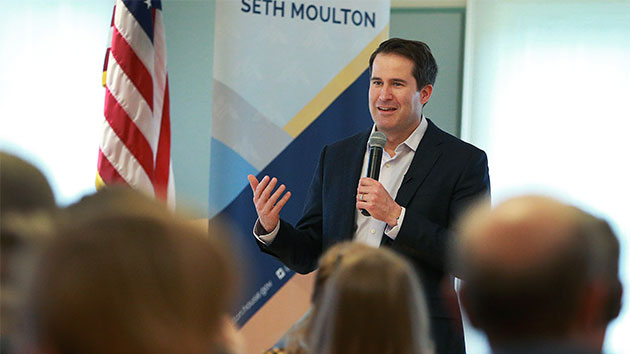 Jim Davis/The Boston Globe via Getty Images
Posted on May 19, 2019 by ABC News

(WASHINGTON) — Rep. Seth Moulton, D-Mass., a 2020 presidential candidate and Iraq war veteran, released his “National Service Education Guarantee” plan Sunday to encourage young Americans to serve their country — in the military, in AmeriCorps, in FEMA Corps or, in what he would create if elected, the “Federal Green Corps” tasked with combating climate change and helping the environment.

“[This is] the kind of forward-looking policy that I think we need to meet the challenges of a changing world, to address climate change, to bring broadband to rural communities and to say to America we need a common mission,” Moulton told ABC News Chief Anchor George Stephanopoulos on ABC’s “This Week.”

The Marine veteran described his plan as an investment in the future, saying “If you invest in America then America will invest in you.” he said.

Modeled on the G.I. Bill, the plan would establish an education benefit for those who serve and would expand the president’s cabinet by creating a secretary position for the lead administrator of a renamed and restructured National and Community Service Administration.

Many of the 2020 presidential candidates have released education policies, with some focusing on free college tuition. But Moulton’s pitch emphasizes public service and allocates money for those who serve towards education and job-training benefits, including an option for vocational schools.

Different than the selective service, Moulton said on “This Week” that the call to serve would not be mandatory.

“I’m asking all 33 million young Americans to consider serving their country … not to make it a requirement, but an expectation,” he said.

Moulton said this would be the “largest call to national service since World War II.”

The plan comes at a time where public service is not widely popular among Americans. There are 75,000 people currently serve with AmeriCorps and 1.3 million are active duty military personnel, which makes up roughly 0.4% of the entire U.S. population.

In a field of 23 Democratic candidates, Moulton said he has found a void his campaign could fill by focusing on public service and national security.

“I’m the only one who’s really been talking about national security and taking on President Donald Trump in his job as commander in chief, and I do that with the experience of having served on the ground in combat,” he said Sunday.

The three-term congressman serves on the House Armed Services Committee and has long been an advocate for fellow veterans: he created the Serve America PAC to support Democratic veterans running for office. This past year, 40 Republicans lost their seats in the U.S. House of Representatives and, of the 40 newly-elected Democrats, 21 of them were backed by the Serve America PAC.

Moulton said he doubts Trump’s ability to lead, calling the president a “weak commander in chief” who “dodged his own generation’s war” by using his father’s connections. He also criticized Trump’s national security advisor John Bolton, who served in President George W. Bush’s administration, claiming Bolton is “pushing America into Iran” like he “pushed America into Iraq” under Bush.

Pointing to his seven years in the U.S. Marine Corps, Moulton said it has “given[him] a firsthand perspective on what it takes to make America safe and strong.”

Describing his time in combat, Moulton told “This Week,” “In fact, I fought Iranians on the ground in Iraq in 2004. It was bloody. We won. And if necessary, I will fight Iran again. But right now, war is not necessary.”