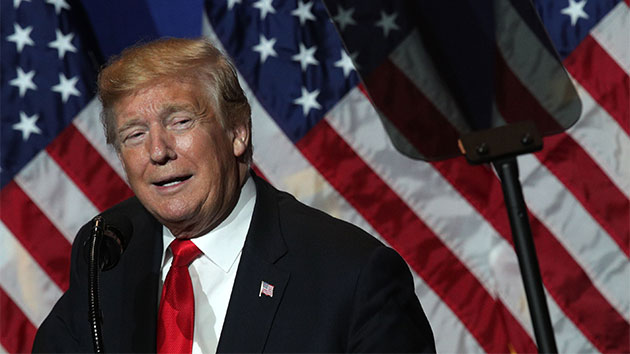 (WASHINGTON) —  President Donald Trump broke his silence on the increasing trend of states passing restrictive abortion bans late Saturday, denouncing bills like the one that passed last week in Alabama.

Trump said he is “strongly Pro-Life,” but said he does favor allowing women to get abortions in the case of rape, incest or the health of the mother.

The bill passed by the Alabama legislature and signed by Gov. Kay Ivey on Wednesday contains no exemption for rape or incest, though it does allow abortions if the mother’s life is threatened.

….for Life in 2020. If we are foolish and do not stay UNITED as one, all of our hard fought gains for Life can, and will, rapidly disappear!

Trump went on to say his position was the same one taken by former President Ronald Reagan, still a bastion of Republican values 30 years after leaving office.

The president pointed to his nomination of pro-life judges — including Supreme Court Justices Brett Kavanaugh and Neil Gorsuch — as a reason to reelect him in 2020.

“We have come very far in the last two years with 105 wonderful new Federal Judges (many more to come), two great new Supreme Court Justices, the Mexico City Policy, and a whole new & positive attitude about the Right to Life,” he wrote. “The Radical Left, with late term abortion (and worse), is imploding on this issue. We must stick together and Win for Life in 2020. If we are foolish and do not stay UNITED as one, all of our hard fought gains for Life can, and will, rapidly disappear!”

Alabama’s law is expected to quickly be challenged in court and possibly even appealed all the way to the Supreme Court. That would set up a battle over Roe v. Wade, the landmark 1973 federal ruling that allowed women to be able to choose to have an abortion.

Georgia, Missouri, Mississippi, Ohio and Kentucky have all passed so-called “heartbeat” abortion bills, outlawing the practice after as early as six weeks into pregnancy.

The most recent ABC News/Washington Post poll on abortion, released on Aug. 29, 2018, showed that 66% of respondents wanted the Supreme Court to keep access to abortions the same as it is now, or easier. The poll showed 30% wanted to make it harder.

Vice President Mike Pence said Saturday he was proud of the Trump administration for standing “without apology” for the “sanctity of human life” while speaking to graduating students at Taylor University in his home state of Indiana.

“I couldn’t be more proud to be part of an administration that stood strong on the timeless values that have made this nation great, stood without apology for the sanctity of human life,” Pence said.

Trump has made late-term abortions a rallying point — literally — as he ramps up for the 2020 campaign. He discussed the issue at his 2019 State of the Union address, criticizing Virginia Gov. Ralph Northam, a former pediatric neurologist, for saying a fetus could be aborted late in pregnancy if it was “non-viable.”

On May 8, at a rally in Panama City Beach, Florida, he again brought up the topic.

“Democrats are aggressively pushing late-term abortion, allowing for children to be ripped from their mother’s womb right up until the moment of birth,” Trump said

Most Democratic candidates have come out strongly in favor of a woman’s right to choose in recent days.

“A woman’s right to control her own body is basic constitutional right,” Sen. Bernie Sanders said while campaigning in South Carolina on Saturday. “I think it is beyond belief to me that and again in the year 2019. People are trying to take that very basic, right away.”

Former Rep. Beto O’Rourke called it “literally a life or death issue in the United States of America right now” in an interview Friday on MSNBC, while Sen. Elizabeth Warren released an abortion policy on Friday, writing, “Congress should pass new federal laws that protect access to reproductive care from right-wing ideologues in the states.”