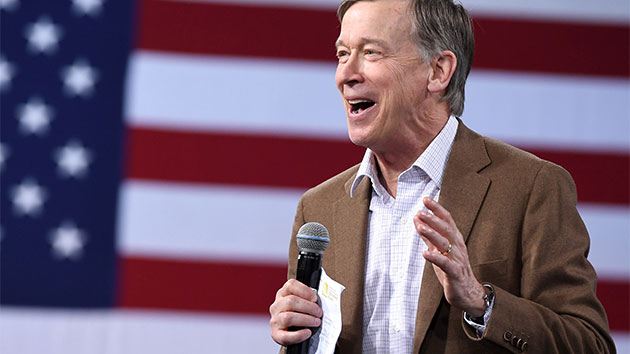 Ethan Miller/Getty Images
Posted on May 19, 2019 by ABC News

(NEW YORK) — Former Colorado Gov. John Hickenlooper, hoping to emerge from the lower echelon of a crowded Democratic presidential primary field, appeared on ABC’s “This Week” on Sunday to push his centrist message focused on reviving the American middle class.

“I’m running for president because Donald Trump has been fueling this national crisis of division, of taking our country backwards. And the answer is not socialism,” Hickenlooper, drawing an implicit contrast with some of his Democratic rivals, told ABC News Chief Anchor George Stephanopolous.

“I’ve spent my whole life bringing people together and getting big progressive things done,” Hicklenlooper said, touting his record as Colorado’s chief executive. “We’ve achieved almost universal health care coverage. And we beat the NRA with tough, tough gun laws. I think the real challenge here is how do we get that nonsense that’s taken over Washington and replace it with common sense?”

Hickenlooper, who is set to deliver a major foreign policy speech in Chicago on Monday, decried Trump’s foreign policy as “isolationist and reckless,” but also took swipes at some in his own party who he says “would have the United States withdraw from global engagement.”

“That makes us less safe. The only way to full security is through constant engagement. And by reviving U.S. leadership, we actually make our country safer. But we also make it more prosperous,” Hickenlooper argued.

He has said his major foreign policy credentials include overseeing Colorado’s six military bases and forging economic relationships with countries like Israel.

Pressed on his decision to forgo a run for the U.S. Senate in 2020 and instead run for president, Hickenlooper threw cold water on the idea that he would re-consider a Senate run if his presidential bid did not pan out.

“I’d be a difficult candidate as a senator. I’ve spent my whole life putting teams together both as an entrepreneur in the private sector, but also as a mayor and as a governor. And by building those teams, we’ve been able to bring people together and do the big progressive things that people said couldn’t be done,” Hickenlooper said. “That’s the only way we’re going to … be able to bring some common sense to Washington.”

Hickenlooper has grounded his campaign in the same pragmatic approach that defined his political career, from his unlikely election as mayor of Denver through his two successful terms as Colorado’s governor, and he has actively pushed back on the priorities of the progressive wing of the Democratic Party.

He is betting his problem-solver persona will ultimately be rewarded by Democratic voters.

Hickenlooper recently penned an op-ed in the Washington Post entitled “The Green New Deal sets us up for failure. We need a better approach,” and followed up by the release of an economic plan rooted in his belief in a more just form of capitalism.

Thus far his campaign has struggled to break through in a Democratic field that has swelled to 23 candidates.

While he has qualified for the first Democratic primary debates based on polling, he has not met the Democratic National Committee’s 65,000 individual donor threshold, making him one of a handful of candidates who could find himself left out of the crucial first debates.