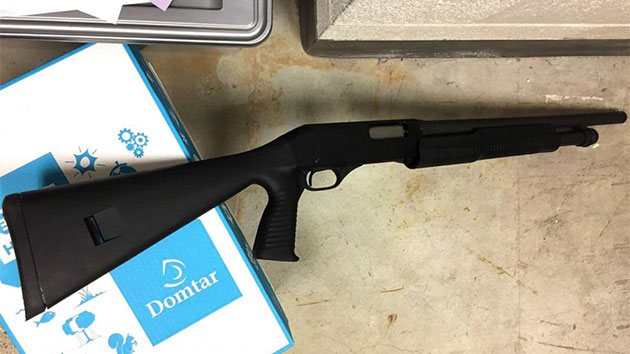 Portland Police Bureau
Posted on May 19, 2019 by ABC News

(PORTLAND) — The “hero” football coach who disarmed an alleged gunman at an Oregon high school said Saturday he “put his life on the line” for his students because he didn’t have “any other choice but to act.”

Keanon Lowe, who coaches football and track and field at Parkrose High School, wrestled the alleged gunman, Angel Granados Dias, 18, to the ground when police say the suspect brought a weapon on campus Friday afternoon.

Lowe appeared on “Good Morning America” on Sunday morning to describe the chaotic moment. He said he was radioed to the Fine Arts Building, unaware of the situation.

“I walk into a classroom, ask if the student’s there. I’m in the classroom there for 15 or 20 seconds and the door opens and there is a student with a shotgun,” Lowe told “GMA.” “Everything happened so fast and it was the longest fraction of a second of my life, but I kind of assessed that situation and my instincts kicked in.

“I lunged for the gun and we both had the gun, we had four hands on the gun. Students are running out of the back of the classroom and I’m just trying to make sure the end of the gun isn’t pointing toward where the students are running.”

Lowe wrote about the moment on Twitter Saturday afternoon for the first time.

“When I signed up to be a Security Guard, Football and Track & Field Coach for Parkrose High School, I did so to guide and coach young people whose shoes I had once been in,” he tweeted Saturday. “I had no idea, that I would one day have to put my life on the line like I did yesterday for my students.”

Lowe said when Granados Dias allegedly went to the school and put his students in danger, there was no option but to try to stop him.

“When confronted with the test the universe presented me with, I didn’t see any other choice but to act,” he continued in the tweet. “Thank God, I passed.”

No one was injured in the Friday afternoon scare, police said.

“I’m blessed to be alive and extremely happy that the students are safe,” Lowe tweeted.

“He’s a hero,” one student told KATU on Friday.

A police sergeant said the shooting threat ended with the “best-case scenario.”

“The staff members from all accounts did an excellent job,” said Portland Police Sergeant Brad Yakots.

Police said the investigation was ongoing.

But Lowe said the experience has been a blur, and has made him reflect on life and gun violence in schools.

“I’ve spent the last 24 hours being more appreciative of my family and realizing we have a serious problem,” he said.

“I’m not sure what’s next, I haven’t had the time to really think about it,” he added. “But I am sure I want to be a part of the solution to school gun violence.”

I’m blessed to be alive and extremely happy that the students are safe. I’m not sure what’s next, I haven’t had the time to really think about it. But I am sure I want to be a part of the solution to school gun violence. Thank you @PortlandPolice for your help #ParkroseHighSchool