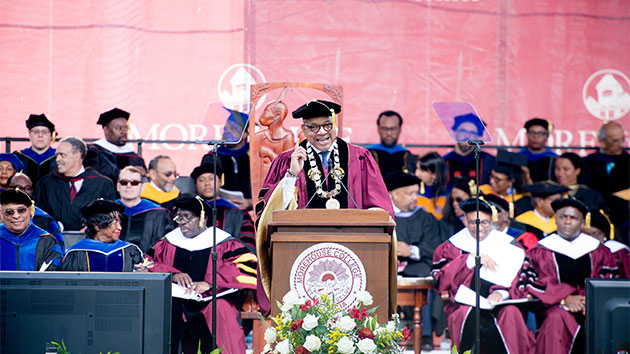 Marcus Ingram/Getty Images
Posted on May 19, 2019 by ABC News

(ATLANTA) — While most commencement speakers offer words of encouragement to college graduates headed into the cold and cruel work world, billionaire philanthropist Robert Smith left the class of 2019 at Morehouse University inspired and astonished by his pledge to “put a little fuel in your bus.”

During his keynote graduation address on Sunday at the historically-black, all-male Atlanta college, Smith, the chief executive officer of the San Francisco-based Vista Equity Partners, promised to pay off the student loans of the nearly 400 graduates, a pledge estimated to cost him $40 million.

“On behalf of the eight generations of my family who have been in this country, we’re going to put a little fuel in your bus,” Smith told the 396 graduates in a surprise announcement.

Pointing out the alumni seated in the audience, Smith said, “This is my class, 2019,” and challenged them to follow his lead.

“My family is making a grant to eliminate their student loans,” Smith said.

The pronouncement prompted a jaw-dropping standing ovation from the graduates and their families, and chants of “MVP! MVP!”

But Smith, ranked by Forbes magazine as one of the richest people in America with an estimated net worth of $4.4 billion, said he had one request from the beneficiaries of his generosity.

“Now, I know my class will make sure they pay this forward,” Smith said. “I want my class to look at these alumni, these beautiful Morehouse brothers, and let’s make sure every class has the same opportunity going forward.”

Smith, 56, who graduated from Cornell University and Columbia University Business School, received an honorary degree from Morehouse on Sunday. Back in January, he donated $1.5 million to Morehouse to create the Robert Frederick Smith Scholars Program and a park at the school.

He said he was stunned by Smith’s announcement. He added that he had spoken to Smith on Saturday night about student debt being one of the biggest challenges graduates of Morehouse faced, but he had no idea what Smith was going to do a few hours later.

“To remove that burden allows them to start this phase of their lives with so much more potential than they ever had when they sat down this morning because they can now do anything they want to do and nothing because they have to pay that debt,” Thomas said.

He said that in his 30-plus years in academia, “I’ve never seen anything like this.”

“Three-hundred-and-ninety-six individuals will have their debt wiped out thanks to Robert F. Smith,” Thomas said.

Graduate John Jacob Burns of New Rochelle, New York, was “amazed” by Smith’s grant, and said he has $35,000 in student loans.

“Even graduating from Morehouse was a tremendous blessing,” Burns told ABC News. “To get all my debt paid off after that…that was like something I couldn’t even imagine.

“Throughout his speech, he talked about a commitment to black people and he obviously demonstrated it at the end of the speech,” Burns, who plans to go to graduate school at the University of Chicago on a full scholarship, said of Smith.

Burns’ father, Carney Burns, who graduated from Morehouse in 1988, said that initially he couldn’t believe what he heard Smith say, and had to ask people all around him if it was true.

“After each person confirmed to me, yes, in fact, what he said is true, it was elation, it was surprise, but most of all it was respect for someone who stepped forward and did such a meaningful act for so many people,” the senior Burns told ABC News.

Graduate Ernest Holmes of Sayreville, New Jersey, said he and his classmates were overwhelmed by Smith’s announcement.

“When he announced that he was going to pay off all our student debt, it was like a brief moment of disbelief and then immediately everyone went into tears, into hugging, into crying together,” Holmes told ABC News, adding that he has $10,000 in student loans.

Holmes, who earned degrees in computer science and mathematics, said he’s already accepted a software engineering job at Google and plans to fulfill Smith’s wish that he and his classmates return his benevolence by paying it forward. He said he plans to be part of the $100,000 club, Morehouse alumni who give back that amount to the school.

“So that’s one of my goals within the next 10 years,” Holmes said.

Smith’s pledge came a month after a Wall Street Journal report showed that the student debt crisis was hitting historically black colleges like Morehouse the hardest.

The report also found that graduates of historically black colleges failed to pay down even $1 of their original student loan balance in the first few years out of school, and that the amount of money parents borrowed in 2017-2018 to put their children through those schools had spiked 33 percent compared to 2000-2001, even when adjusted for inflation.