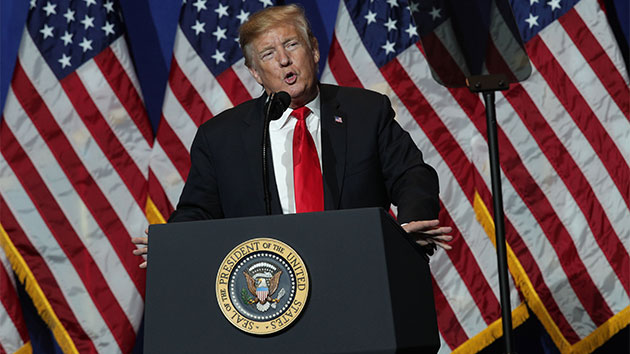 (WASHINGTON) — Rep. Justin Amash has become the first congressional Republican to call for the president’s impeachment based on special counsel Robert Mueller’s report.

The self-identifying libertarian Republican and frequent Trump critic shared his “principal conclusions” on Saturday, including his assertion that “President Trump has engaged in impeachable conduct” in a Twitter thread on Saturday after reading the full redacted report.

Here are my principal conclusions:1. Attorney General Barr has deliberately misrepresented Mueller’s report.2. President Trump has engaged in impeachable conduct.3. Partisanship has eroded our system of checks and balances.4. Few members of Congress have read the report.

The special counsel did not establish that the Trump campaign or anyone associated with it conspired or coordinated with Russia. He also provided no conclusion on the matter of possible obstruction of justice, choosing instead to leave that decision for Congress.

Amash said that the 448-page report “identifies multiple examples” of the president’s conduct “satisfying all the elements of obstruction of justice.”

Democratic House Speaker Nancy Pelosi has stopped short of calling for impeachment but left the door open to the prospect, though Democratic leaders are reluctant to launch a divisive effort that would likely end with the president’s acquittal in the GOP-led Senate.

In his lengthy post, Amash stated that partisanship is getting in the way of our system’s checks and balances.

“When loyalty to a political party or to an individual trumps loyalty to the Constitution, the Rule of Law—the foundation of liberty—crumbles,” he said.

Our system of checks and balances relies on each branch’s jealously guarding its powers and upholding its duties under our Constitution. When loyalty to a political party or to an individual trumps loyalty to the Constitution, the Rule of Law—the foundation of liberty—crumbles.

Amash has frequently been one of the few Republicans willing to call out Trump when he feels the president has crossed the line.

Amash was one of 13 Republicans to vote with Democrats against Trump’s national emergency to fund the border wall. Amash also took a different approach than his fellow Republicans in his questioning of former Trump attorney Michael Cohen. He asked Cohen softer, open questions instead of trying to delegitimize Cohen’s testimony and criticize Democrats.

Another one of Amash’s primary conclusions from the redacted report was that Attorney General Bill Barr “deliberately misrepresented” Mueller’s findings.

“It is clear that Barr intended to mislead the public about Special Counsel Robert Mueller’s analysis and findings,” Amash wrote.

In comparing Barr’s principal conclusions, congressional testimony, and other statements to Mueller’s report, it is clear that Barr intended to mislead the public about Special Counsel Robert Mueller’s analysis and findings.

Attorney General Barr said he had determined that a case for obstruction was not warranted. In his statement to lawmakers, Barr underscored that the report stated that “while this report does not conclude that the president committed a crime, it also does not exonerate him.”

Amash has said as recently as last month that he hasn’t ruled out seeking the Libertarian nomination for presidency in 2020.