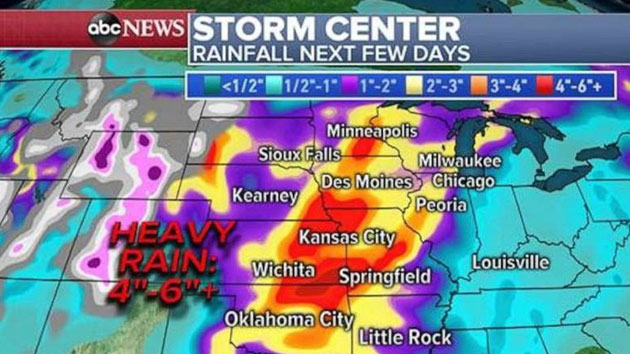 (NEW YORK) — A major severe weather outbreak got underway on Friday across parts of the Plains with 31 reported tornadoes in four states (Nebraska, Oklahoma, Kansas and Texas). The majority of these tornadoes came from western Kansas and Nebraska — creating some incredible images of large funnels in the western prairies.The severe weather threat will expand eastward through the rest of the Plains Saturday and into parts of the Midwest and Northeast on Sunday. The next concern is a major severe weather risk targeting the Southern Plains on Monday.Typically, the second half of May into early June can be quite violent for severe weather in the central U.S.There is a new tornado watch Saturday morning for parts of Texas and Oklahoma, including San Angelo, Abilene and Wichita Falls. This tornado watch will go expire at 10 a.m. Central time. Storms in this region are likely to become severe, with a couple of tornadoes, damaging winds and large hail all possible.Action will continue throughout the day, expanding east and north as moisture begins to interact with a strong system moving through the Central Plains. Numerous severe storms will fire up from Texas to southern Minnesota on Saturday, with the entire region will be at risk for tornadoes, destructive winds and large hail.There is an enhanced risk across northeast Texas and into parts of Louisiana and Arkansas, including the metro areas of Dallas, Shreveport, Louisiana; and Little Rock, Arkansas. In the enhanced risk region there is a chance for strong tornadoes and destructive winds. It is important to note that destructive, straight-line winds can still be extremely dangerous and cause major damage.On Sunday, this system will move into parts of the Midwest, and storms will begin to crop up from Illinois to western New Jersey.Thunderstorms will move into the Midwest on Sunday afternoon and evening.There is a slight risk for severe weather in this region, including Chicago, Indianapolis, Detroit and Cleveland. Damaging winds and large hail will be the primary threats. While the tornado risk should remain limited, brief tornadoes cannot be ruled out.All of this severe weather activity is a prelude to a dramatic ramping up on Monday when the next impulse comes off the Rocky Mountains into the Southern Plains. A major severe weather event will likely occur on Monday — and the severe weather will likely last into the middle of the week.There is a moderate risk and enhanced risk for severe weather in parts of Texas, Oklahoma and Kansas on Monday. This includes some areas that are well known for particularly violent weather in late May, including Oklahoma City and Woodward, Oklahoma and Wichita and Wichita Falls, Kansas.Unfortunately it appears all the ingredients will come together on Monday for strong tornadoes, perhaps violent and on a long track, in the region. These type of severe weather events usually unfold in the late afternoon and evening hours.Additionally, the severe weather this weekend and the next round of severe weather coming Monday and lasting into the middle of next week will have the potential to drop torrential rain through much of the central U.S.Locally, over 6 inches of rain is coming to parts of the central U.S. over the next few weeks, which could cause flash flooding. Many spots across parts of the region — including the Upper Midwest — have very saturated ground from a snowy winter, and heavy rains already this spring. Therefore, flash flooding and river flooding will become a significant concern through the coming week.Also, robust, supercell thunderstorms can drop torrential rain, obscure tornadoes and cause major life-threatening flooding. There is a potential for activity like this in parts of the Plains over the coming days.Copyright © 2019, ABC Radio. All rights reserved.