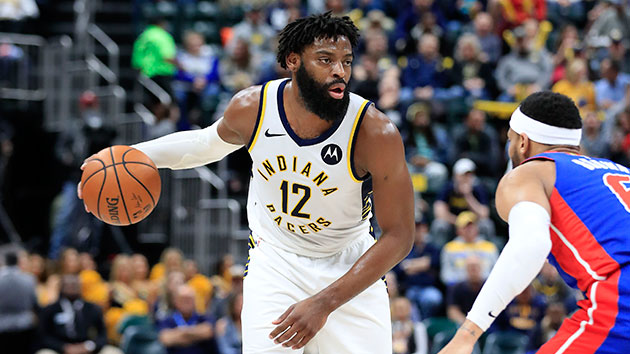 (NEW YORK) — Indiana Pacers guard Tyreke Evans has been suspended for two seasons by the NBA due to a violation of the league’s Anti-Drug Program.The league announced the news on Friday afternoon.Evans will have to sit out two seasons, after which he can apply for reinstatement with the league. The player’s association must also approve the reinstatement.”The Indiana Pacers were informed Friday by the NBA that Tyreke Evans has been dismissed from the league for a violation of the league’s anti-drug policy,” the Pacers said in a statement. “We take these matters seriously and will reach out to Tyreke to offer our support.”The league and the NBAPA are prohibited from publicly disclosing what caused Evans to be suspended. A player can be disqualified for failing a test for a drug of abuse or being convicted or pleading guilty to possessing or distributing drugs.O.J. Mayo and Chris “Birdman” Andersen are two of the most recent notable players suspended under the same rule.The 29-year-old is a former first-round pick of the Sacramento Kings and was the NBA Rookie of the Year in 2010.Evans played 69 games for the Pacers this season and averaged 10.2 points, 2.9 rebounds and 2.4 assists per game. He started 18 games.The past season was his first with Indiana and his scoring total was the lowest of his 10-year career. He showed signs of being a star in the league as a rookie, when he started 72 games and averaged 20.1 points, 5.8 assists and 5.3 rebounds per game.But that scoring average ended up being the highest of his career. He declined in points per game in each of his first five seasons in the NBA.After four seasons in Sacramento, he bounced around from the New Orleans Pelicans, back to the Kings, then on to the Memphis Grizzlies and Pacers.Indiana was bounced in the first round of the playoffs by Boston. He averaged 15.3 points per game in four games.His deal with the Pacers was for one season and $12.4 million, making him a free agent once the league season ends. Copyright © 2019, ABC Radio. All rights reserved.