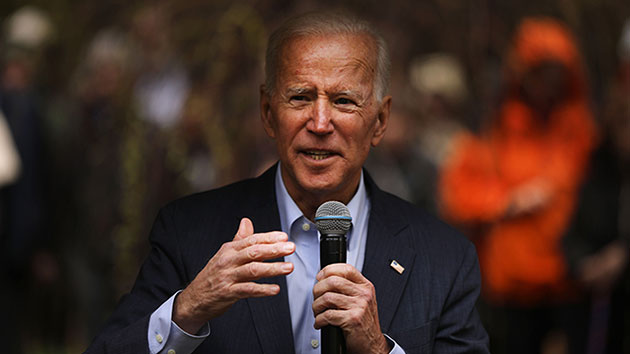 Spencer Platt/Getty Images
Posted on May 18, 2019 by ABC News

(WASHINGTON) — Former Vice President Joe Biden will head to Philadelphia Saturday, for the third and final phase of his presidential campaign rollout — making his pitch to unite the country.Biden will hold his first campaign rally in Eakin’s Oval near the famous “Rocky steps” of the Philadelphia Art Museum Saturday afternoon.The rally, which was announced the same day Biden officially entered the race in April, will focus on his vision “for unifying America with respected leadership on the world stage — and dignified leadership at home,” according to a press release from the campaign.The event is seen as an unofficial bookend to the campaign launch.An excerpt of the speech released by the campaign Saturday morning previews Biden’s pitch on unity. Biden will argue that while some Democrats argue for using anger to chart a path toward victory against President Trump in 2020, Biden will provide “a different path” for members of all political parties, rather than the divisive leadership of the current president.”Some say Democrats don’t want to hear about unity, that they are angry — and the angrier you are, the better. That’s what they are saying to have to do to win the Democratic nomination. Well, I don’t believe it. I believe Democrats want to unify this nation. That’s what we’ve always been about. Unity,” the excerpt says.”If the American people want a president to add to our division, to lead with a clenched fist, closed hand and a hard heart, to demonize the opponents and spew hatred — they don’t need me. They already have a President who does just that. I am running to offer our country – Democrats, Republicans and Independents – a different path,” according to the excerpt.The rally will be much larger than Biden’s previous events in early voting states like Iowa, New Hampshire and Nevada. A campaign official told ABC News that a crowd of 2,000 is expected at the event.The campaign has placed a heavy focus on Philadelphia as the “birthplace of American democracy,” and the rally location was chosen for that reason.”It was here that two of the most important documents in the world’s history were written,” another excerpt of Biden’s prepared remarks read.”In 1776, the Declaration of Independence: ‘We hold these truths to be self-evident.’ Those words formed the American creed. Equality. Equity. Fairness. America didn’t live up to that promise for most of its people, for people of color, for women. But we are born of the idea that every single person in this country — no matter where you start in life — there’s nothing that’s beyond your capacity if you work hard enough for it,” the excerpt read.The campaign announced Thursday Philadelphia would also be home to their headquarters.“Philadelphia is a thriving city and a testament to the American spirit, built by the ingenuity and tenacity of ordinary people who did extraordinary things. Its storied history and celebrated diversity will serve as an inspiration for Team Biden, and is the ideal setting to continue our fight for the soul of this nation,” Biden’s campaign manager Greg Shultz said in a press release announcing the headquarters.Both Biden and his wife, Dr. Jill Biden, were born in the key swing state that will be vital for any Democrat taking on Trump to win in 2020, and a Quinnipiac poll out this week indicates Biden has strong appeal among Democrats in the Keystone State. Biden took the top spot in the poll, with 39% of Democratic voters in Pennsylvania naming the former vice president as their preferred candidate.The poll also found Biden beat Trump in a head-to-head in a match-up in the state, 53% to 42%.Since announcing his presidential run on April 25, Biden has focused his message on why he decided to run — his view that the country is in a battle for the soul of America, and restoring the middle class as the backbone of the economy.A campaign official tells ABC News that following the rally Saturday, the campaign will shift to a new phase — focusing on Biden’s policy proposals, and what he will do as president.The rollouts will give “specifics of the policies that Vice President Biden has believed in and has fought for his entire career and will make the centerpiece of a Biden White House,” according to the official.After Biden’s rally Saturday, the former vice president will travel to Tennessee, Florida and Texas in the coming weeks — three states Trump won in 2016. Biden’s full schedule for those trips has yet to be announced.Since getting into the race, Biden has taken the top spot all polls of the Democratic field, according to FiveThirtyEight’s poll tracker.Biden has maintained he will “not speak ill of a fellow Democrat,” but his frontrunner status has put a target on his back from his fellow Democrats. Biden has faced criticism from his opponents on issues from criminal justice reform, to climate change — a sign of what could come in the Democratic debates next month.Copyright © 2019, ABC Radio. All rights reserved.