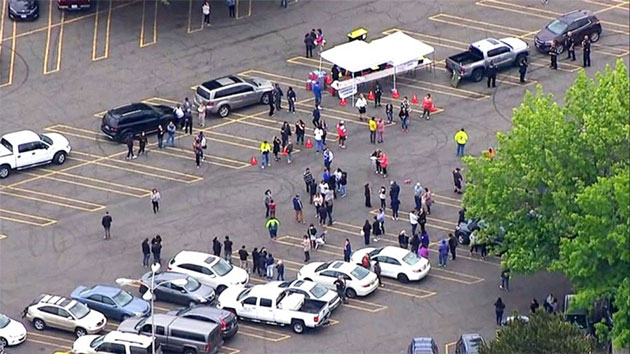 (PORTLAND) — An Oregon high school coach is being hailed as a hero after students say he disarmed a man with a gun in the middle of the school day.

Portland police have a suspect in custody after the gun scare at Parkrose High School in Northeast Portland on Friday.

Authorities said that shortly before noon the suspect brought a gun onto the campus, where  One staffer wrestled the suspect to the ground near the school’s tennis courts and disarmed him, police said.

Students told ABC affiliate KATU-TV that the staffer was Keanon Lowe, the school’s football and track and field coach, who was formerly a star wide receiver with the University of Oregon Ducks.

Portland police arrived within minutes of the incident and began a room-by-room search of the school accompanied by a full evacuation.

Students were bused from the school to a nearby rendezvous point to be picked up by their parents.

In a tweet, Portland Police officials said, “We ask for patience at Parkrose High School. … No injuries found at this time.”

“This was a best-case scenario,” said Portland Police Sergeant Brad Yakots. “The staff members from all accounts did an excellent job.”

Police said they had recovered the weapon and that the investigation into the suspect’s identity was ongoing.

Biden’s first 100 days live updates: Biden slams Trump vaccine plan as ‘dismal failure’
Clare Crawley breaks her silence on split from Dale Moss: “This was not what I expected or hoped for”
Priyanka Chopra Jonas says the racism she suffered in high school forced her to leave America
Psst: Shonda Rhimes’ ‘Bridgerton’ renewed for second season at Netflix
Chrissy Teigen says sobriety is “a different world for me”
900,000 Americans filed for unemployment insurance last week