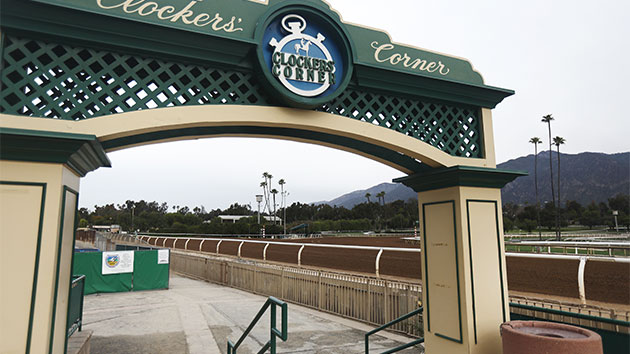 A horse also died Friday at Pimlico Race Course in Baltimore, on the eve of the Preakness Stakes, the second leg of the Triple Crown.

Santa Anita and Pimlico are both owned by the Canadian-based Stronach Group.

“Commander Coil, a three-year-old gelding, sustained a fatal shoulder injury while galloping during training on the morning of May 17th. Equine shoulder injuries are rare, especially for a horse that is galloping as opposed to breezing or racing. A comprehensive evaluation will be completed to understand what might have caused this uncommon injury,” a spokesperson for Santa Anita said in a statement to ABC News.

Despite the rash of horse deaths since December, the death at Santa Anita marks the first one in six weeks.

“Since reforms were introduced on March 15, there have been over 80,000 gallops during training with no fatalities,” Santa Anita Park’s statement said.

Clifford Sise, a veteran horse trainer for 47 years who is currently working with 15 horses between San Luis Rey Training Center in San Diego and Santa Anita, called the death “a misfortune.”

“It’s very rare to break a shoulder,” Sise, who was at Santa Anita for horse races on Friday and Saturday, told ABC News. “When a horse isn’t doing anything the brain says, ‘Let’s decalcify these bones.’ When you’re back into training, then the body says, ‘Ok, we need calcium,’ and the bones get stronger and stronger. So he’s been long enough to get over that part.

“Maybe the horse just went to bucking or took a bad step and broke its shoulder,” Sise said. “A break in galloping is pretty serious. Nobody’s fault. Nothing to blame. Track’s been good up here. We’ve been over two months and that’s our first breakdown. That’s been pretty good.”

The spate of horse deaths at Santa Anita earlier this year prompted several investigations, including a task force convened by the Los Angeles District Attorney’s Office and the California Horse Racing Board.

In response to news about the L.A. prosecutors’ investigation, Santa Anita said in a statement that the park “is and will continue to fully cooperate with the District Attorney’s investigation. The Stronach Group is fully committed to modernizing our sport in a way that prioritizes the welfare and safety of horses above all. We will work with anyone — including the District Attorney’s office — that shares our commitment to this cause.”

Sise attributed the cluster of thoroughbred deaths to inclement weather. Southern California had an unusual amount of rain this past season after many years of drought or near drought, which would have impacted the quality of the track the horses can run on safely.

“Every time it rains you seal the tracks as hard as it can get. So the water runs off of it,” Sise said. “It would stop raining only three days, where you can really work on it. You need at least seven, eight days to dry out. To go to the bottom of it and the cushion and work on it. It was nobody’s fault.”

Across the country in Maryland, the horse died after racing.

“Congrats Gal suffered sudden death after the eighth race today,” the Stronach Group, which owns Pimlico, said in a statement to The New York Times. “The incident occurred after the wire. Commission veterinarians attended to the horse immediately. Our thoughts go out to all of the owners, trainers and connections of Congrats Gal.”

Stronach did not immediately respond to a request from ABC News for comment. It did not give Congrats Gal’s cause of death.