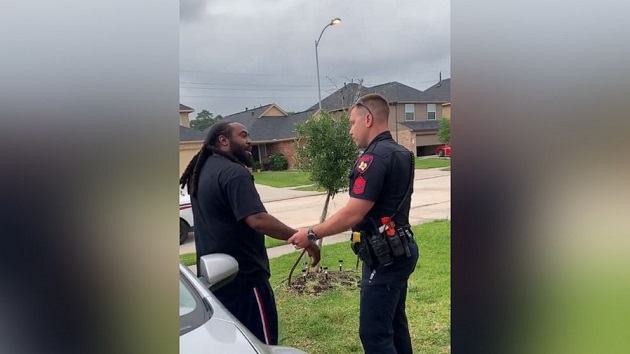 (HOUSTON) — An African-American man is demanding a white Texas constable deputy be fired after he says he endured a terrifying encounter in which he was racially profiled and mistaken for a fugitive wanted in Louisiana.Clarence Evans, 39, said the ordeal occurred on May 8 in the driveway of his Houston home and in front of his wife, 6-year-old son, and 1-year-old daughter. Evans’ wife, Kenya, recorded the confrontation on her cellphone and Evans posted in on Facebook. “That officer needs to be fired,” Evans told ABC News on Thursday. “I don’t understand how he’s still an officer of the law.”The Harris County Constable for Precinct 4, where the deputy works, stood behind the deputy’s actions on Thursday and blamed Evans for escalating the situation by not complying with a request to hand over his identification.Evans said he was standing in front of his home, playing with his children, when the deputy, whose name has not been released, pulled up to this house and initially asked him about his dog.”At the time, my dog was in the house,” Evans said. “I’m breeding my dog so I thought he was stopping to ask about some puppies or something. So, I didn’t think nothing of it.””He told me my dog was stolen,” he said. “I told him, ‘Well, that can’t be possible."”The episode quickly escalated, according to Evans, and the deputy began asking him his name and grabbed him by the right arm.”He grabbed me and told me, ‘No, I already know your name … and you’ve got a warrant out of Louisiana,” Evans said.He said he immediately sent his son into the house to get his wife, who pulled out her cellphone and started recording.In the video, the deputy called Evans “Quentin” at one point.Both Evans and his wife told the officer Evans’ name wasn’t Quentin and that he’s never lived in Louisiana.But the deputy continued to grab Evans arm and attempted to take him into custody.Eventually, another constable deputy pulled up to Evans’ home with his lights and siren on. The second deputy handed his colleague a cellphone.The deputy then showed a photo on his phone to Evans apparently of the wanted fugitive.”Here’s the deal: Doesn’t that look a lot like you?” the deputy asked Evans.Evans said the man in the photo had dreadlocks similar to his and also a similar complexion. But Evans said that was the extent of what they had in common.”He was a lot older,” the 39-year-old Evans told ABC News.The other deputy agreed that the man in the photo was not Evans and they went back to their cars and drove away.Mark Herman, the Harris County Constable for Precinct 4, released a statement saying Evans did not cooperate with the deputy and made matters worse by not handing over his identification when asked. Herman did not identify the deputy.”This individual was not profiled,” Herman said in his statement. “The deputy was informed that this individual was a wanted fugitive out of another state. The deputy was there on officials police business.”Referring to the video Evans posted on Facebook, Herman said, “This individual chose to cuss out the deputy and not cooperate with a law enforcement investigation.”Evans’ lawyer, U.A. Lewis of Houston, said she and Evans are deciding what to do next now that Herman has apparently decided not to discipline the deputy.”We put it in the constable’s hands to try to handle the situation,” Lewis told ABC News. “It doesn’t look like his response is going to be what we were looking for, which is to address the officer. He actually has backed the officer’s position.”Lewis said she has asked officials to show her the alleged warrant and has filed an open record request for it. But, so far, she has not received it.”I find it strange that with all this publicity, all this attention on this wanted person, now is the perfect opportunity to put this person’s photograph out there so we can find this … person who is wanted,” Lewis said. “We don’t know if he’s wanted for a traffic ticket. We don’t know if it’s a murder warrant.”