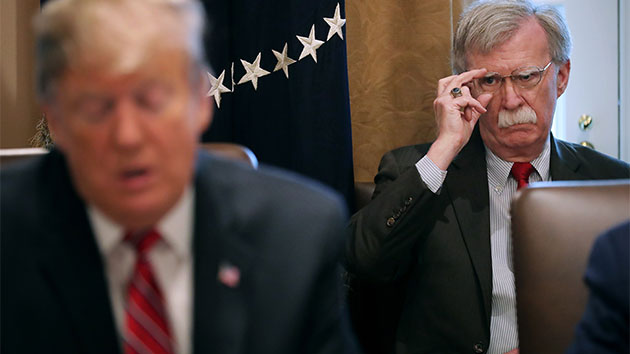 Chip Somodevilla/Getty Images
Posted on May 17, 2019 by ABC News

The president took issue with the “confidential sources” cited in news articles.

“They say confidential sources. You ever notice they don’t write the names of the people anymore. Everything is ‘a source says’ … The person doesn’t exist, the person is not alive. It’s bull—-,” the president said.

Ahead of his remarks, Trump, on Twitter, described reporting about his administration handling of Iran as “fraudulent.”

“At least Iran doesn’t know what to think, which at this point may very well be a good thing!” Trump said in a tweet.

The president repeated his complaint during his speech.

“They put out so many false messages and Iran is totally confused. I don’t know that might be a good thing,” Trump said.

Iranian Foreign Minister Mohammad Javad Zarif responded to Trump’s tweet, arguing “it is apparently the U.S. that “doesn’t know what to think.” We in Iran have actually known what to think for millennia — and about the U.S., since 1953.”

President Trump’s statements come a year after he withdrew the U.S. from the Iran nuclear deal, despite concerns from U.S. allies. It also follows a the State Department earlier this week ordering all non-emergency government employees to leave the U.S. Embassy in Baghdad and U.S. Consulate in Erbil amid tensions with Iran.

U.S. officials told ABC News there were “clear indications” Iran through the Islamic Revolutionary Guard Corps (IRGC) or forces it backs, was preparing for a possible attack against U.S. forces.

Still, the president has expressed he would be open to receiving a call from the Iranian officials – a request reportedly shut down by the regime.

“With Iran, I’d like to see them call me,” the president stated last week. He called out former Secretary of State John Kerry, accusing him of speaking to Iranian leaders and “telling them what to do.”

“What they should be doing is calling me up, sitting down. We can make a deal, fair deal. We just don’t want them to have nuclear weapons, not too much to ask,” the president said.

Key moments from the inauguration of Joe Biden as 46th US president
Trump issues last-minute pardon to ex-husband of Fox News’ Jeanine Pirro
“The ‘Bridgerton’ Effect”: Searches for “embroidery,” “corsets” and other finery skyrocket amid Netflix show’s success
The significance of the Bible Joe Biden is using on Inauguration Day
What happens inside the White House on Inauguration Day
Coronavirus live updates: Biden to sign order requiring masks on federal property