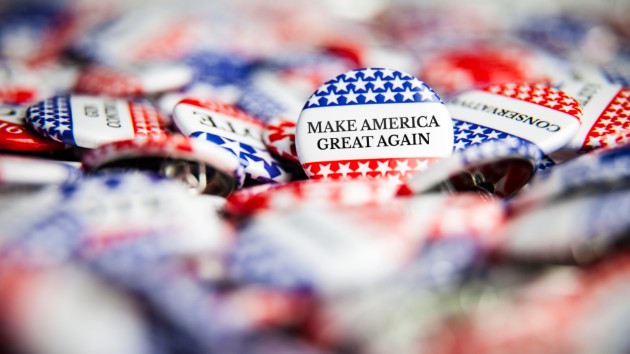 (WASHINGTON) — The Trump campaign is continuing its unprecedented fight to ensure President Donald Trump’s deep-pocketed supporters know there’s only one campaign-approved pro-Trump super PAC to donate to in 2020 — and now they’re targeting a PAC run by former 2016 campaign staffer Corey Stewart.”It is disappointing, but I’m not that surprised. They’re very controlling. They want to control everything,” Stewart, who now leads the Keeping America Great super PAC, told ABC News when asked about the Trump campaign filing a notice of disavowal with the Federal Election Commission a few weeks back. Erin Perrine, deputy communications director for the Trump campaign, told ABC News it is “unconscionable” that Stewart would continue to raise money by “[tricking] people into thinking they are directly supporting the President’s reelection.””I’m starting to feel like an abused dog who keeps getting kicked trying to help the president out,” Stewart said.The Trump team has even taken steps to legally distance itself from Stewart’s Keeping America Great PAC.Back in March, the campaign filed a notice of disavowal with the Federal Election Commission directly aimed at Stewart’s super PAC. But Stewart, who ran against Virginia Sen.Tim Kaine in 2018, said that despite the Trump campaign’s harsh words and FEC filings he will continue to raise funds to support the president’s reelection.Earlier this year, Stewart, a failed 2018 Republican Senate candidate who has been accused of “stoking white supremacists,” took control over the super PAC that previously raised $120,000 supporting U.S. Rep. Dave Brat’s unsuccessful congressional race in Virginia during the 2018 midterms. All of the funding last time around came from Florida donor William Cooley.And now, under Stewart, who was fired by the Trump campaign in 2016, the super PAC says it will work to raise even more money than its 2018 primary haul in hopes of helping to reelect Trump.”We do expect that we’re going to be a big player in 2020,” Stewart said.But last week, the Trump campaign took an extraordinary step to ensure pro-Trump donors send their dollars to only the America First Action super PAC, which is run by close Trump allies, including former Small Business Administrator Linda McMahon.The letter, blasting “any organization that deceptively uses the President’s name, likeness, trademarks, or branding and confuses voters,” followed news that former Trump deputy campaign manager David Bossie had raised millions of dollars using the president’s likeness through his Presidential Coalition organization.Bossie called the report “fake news brought to you by a collaboration of the biased liberal media and unabashed left-wing activists.”Stewart initially told ABC News that he didn’t believe the campaign’s stern statement denouncing rogue fundraising groups was aimed at him because “we’re not a scam PAC.””It’s a very, very different thing from the Bossie PAC,” Stewart said. “Bossie raised mostly small donations. People thought that it was associated with the Trump campaign. We’re not even close to that, and almost everything that we’ve raised is from one big donor. We’re not a scam PAC.”But while Stewart says his super PAC has raised a total of $11,400 for 2020 so far, almost all of which is from its founder, Cooley, the organization is looking to attract other big-dollar donors and contributions later in the year. And despite Stewart’s claim that he’s not interested in the small donor game, the PAC’s website isn’t shy about asking for them, which the Trump campaign appears particularly concerned about.”We’re not using the president’s likeness to raise money,” Stewart argued when asked about the super PAC’s website using the president’s likeness to raise money. “Support president Trump,” reads text plastered over a glossy image of the president at a campaign rally, above a large “donate” button on the front page of his website.Regardless of Stewart’s confusion, the Trump campaign doesn’t seem ready to give an inch on this and is continuing to push donors to just the sole approved super PAC, America First Action PAC.”While America First is an independent organization, we are honored to have the trust and confidence of President Trump,” Brian Walsh, president of America First Action PAC, told ABC News in a statement.”That’s the way it is. It is disappointing,” Stewart said. “I’m really starting to get fed up with this.” Copyright © 2019, ABC Radio. All rights reserved.

Tom Holland admits he broke his laptop when he found out he was the new Spider-Man
Biden’s first 100 days live updates: Day two at the White House
This 81-year-old TikTok influencer is all the fitness inspiration we need
Licensed child-care workers in PA eligible for one-time $600 grant
Key moments from the inauguration of Joe Biden as 46th US president
Trump issues last-minute pardon to ex-husband of Fox News’ Jeanine Pirro