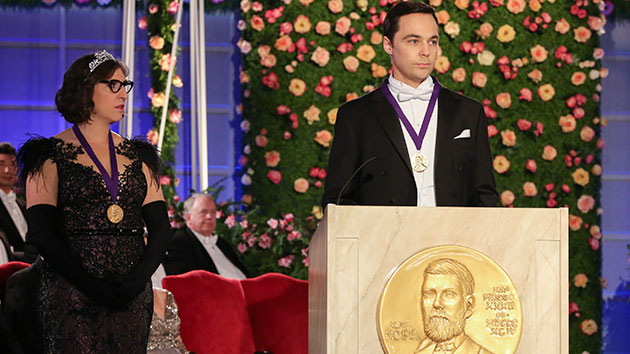 (NEW YORK) — (SPOILERS AHEAD) Lots of things changed, and yet managed to remain comfortingly the same, on Thursday night’s two-part series finale of The Big Bang Theory.  There were no major surprises, though there was a modest one most fans likely didn’t see coming.  But most fans would also likely agree the finale did what they hoped it would: tie up a few loose ends, toss in some trademark moments of personal growth, and give the cast of familiar friends a sweet, loving send-off.

Titled “The Change Constant,” part one of the finale opened with a montage of key moments from the show’s 12-season run — if you’d never before seen the show, it told you enough to get you dialed in to the basics.

Then on to the story itself.  Sheldon, Amy, Leonard and Penny were sprawled on the couch in Leonard and Penny’s apartment.  Sheldon and Amy’s super asymmetry theory is under consideration for the Nobel Prize in physics, and the gang fights to stay awake as they await the phone call from the Nobel committee in Stockholm, Sweden to learn if they’ve won.

Finally, the call comes: they’ve won.  Leonard even gets to slap Sheldon when the latter questions whether or not he’s dreaming, which was its own reward.  And there is much rejoicing.

Amy and Sheldon leave the apartment the next morning, where there’s a clot of reporters waiting for them.  Typically, Sheldon freaks out and runs for cover back inside, leaving Amy to fend for herself.  At the university, Sheldon ducks out of the cafeteria in the face of congratulatory applause, then hides behind his desk to avoid a reporter, leaving Howard to tell the reporter he can interview him instead — Sheldon’s “best friend,” and an astronaut to boot.

Meanwhile, Raj walks in on Amy at her apartment.  She’s in tears, having seen photos of herself in the press: “Am I really this frumpy?” she asks.  Raj encourages her to get a makeover for the press, and for the ceremony.

At the Wolowitz household, Bernadette takes Howard to task for claiming in the interview to be Sheldon’s best friend, when it’s really Leonard — but she backs off when Howard tells her if she plays her cards right, she can be Amy’s best friend when the next interview comes along.

Later in the apartment, Amy unveils her stylish, put-together new look — a haircut, new wardrobe and glasses.  Everyone’s amazed, except for Sheldon.  “I liked you better the way you were,” he says, and leaves.

The remark hurts Amy’s feelings but later, she vows to Raj and Leonard to once and for all stop worrying about how Sheldon’s going to feel, and do what’s right for her.

In the lobby, Penny emerges from the elevator — after not working for 12 years, it’s finally been fixed!  Seeing Sheldon’s in a tizzy, Penny takes him to the Cheesecake Factory, where he confesses there’s just too much change happening and he can’t handle it.  Penny reminds him how much everyone’s changed since they first met.

“I guess the only thing that actually stays the same is that things are always changing,” says Penny.

Just then, Bernadette and Howard appear on the bar TV, talking about their “best friends” Amy and Sheldon.  Back at the apartment, Sheldon takes a major step to embrace change — he avoids the stairs and instead takes the elevator back to his apartment.

Part two, titled “The Stockholm Syndrome,” begins two months later.  Penny and Amy return from getting their dresses for the Nobel Prize ceremony.  Amy’s thrilled not only by the dress, but by the fact “the tailor had to take mine in and let Penny’s out.  Best day of my life!”

Amy and Sheldon head across the hall to their apartment so Sheldon can practice his Nobel speech — it’s a mere 90 minutes long.  Now alone, Leonard and Penny reveal why Penny had to get her dress let out: she’s pregnant, despite the fact she vowed she didn’t want to be a mom.  Turns out coming home to Leonard tipsy after her chat with Sheldon is what changed things.

Back at their house, Bernadette and Howard fret over having to leave the kids behind with Stuart.  They fantasize about the trip to Sweden — mainly, about being able to sleep as long as they like.  Meanwhile, Sheldon rehearses his Nobel speech while Amy watches while wearing her Nobel gown — and the tiara Sheldon gave her way back when.

Amy tells Sheldon he’s got to cut the speech but he doesn’t see how, especially the digs at people who laughed at the Nobel Prize being his lifetime dream.  “I told them all they would rue the day.  How is it going to make me look if the day finally comes and they’re not filled with rue?”

Sheldon briefs everyone on how he expects them to behave during their trip, including advising Penny not to abuse the free alcohol on the flight.  When Penny remarks she’s not going to be drinking, Bernadette off-handedly asks, “Why, are you pregnant?”  Penny laughs it off, saying she doesn’t drink when she flies, despite Bernadette responding, “Please, I’ve seen you drink in the shower.”

Everyone tries to fit themselves and their luggage into the newly working elevator, but it’s a tight squeeze.  For a minute, you wonder if that’s the gag — the elevator will break again and they’ll all get stuck in it and miss the Nobel ceremony.  But no — instead, they use the elevator for the luggage and everyone takes the stairs.

On the plane, Raj is certain a sleeping passenger is Buffy the Vampire Slayer star Sarah Michelle Gellar.  Howard tells him it’s not — and at any rate, he’s too busy worrying about the kids, although Bernadette’s still not.  Meanwhile, hypochondriac Sheldon’s wondering why Penny keeps running to the bathroom.  He’s convinced she’s got a virus that he’s going to catch and frantically confronts Leonard, who tells him to relax — Penny’s pregnant, not sick.

The news spreads to quickly to Bernadette and Amy, who are upset Penny didn’t tell them.  But Leonard’s upset that Sheldon seems not to care — pregnancy, after all, isn’t infectious, declares Sheldon.  And it’s not nearly as impressive as winning the Nobel Prize.

“You are a selfish jerk,” Leonard tells his best friend.  “To hell with you and your Nobel Prize.”

In the hotel, Bernadette and Howard video-chat with Stuart, who assures them the kids are fine — except for Michael running a fever and Halley falling down the stairs, knocking out a tooth and then swallowing it.  Now even Bernadette’s worried.

In their room, Leonard’s still steamed about Sheldon’s selfish behavior on the plane, but all Penny can talk about is how surprisingly great the pickled herring she’s scarfing down tastes — clearly, her pregnancy’s created her first cravings.

There’s a knock on the hotel room door.  It’s Sheldon, with Amy prodding him to apologize for his selfish behavior on the plane, which Sheldon does, unenthusiastically.  Just then, Howard and Bernadette dash in — they announce they’re heading home to be with the kids.  Sheldon again responds selfishly: “Well pull yourself together.  This is a big day for me!”

That’s enough to cinch it for everyone: Howard, Bernadette, Penny and Leonard are heading home.

Back in his room, Sheldon can’t understand why everyone’s being “incredibly selfish.”  Amy responds by calling Sheldon the authority on being selfish, and reminds him that their friends are more important than winning the Nobel Prize.  Sheldon asks Amy how they can be their friends, when “they’re abandoning us.”

“They’re abandoning us because you broke their hearts!” Amy responds.  “I didn’t mean to,” says Sheldon.  “I know!  You never mean to — it’s the only reason people tolerate you!” Amy declares.

When Sheldon asks, “Does that include you?”  Amy replies, “Sometimes, yeah.”

Meanwhile, the pickled herring’s gotten the best of Penny, who’s curled around the toilet.  She’s too ill to travel — and besides, they realize that even with all his flaws, they still love Sheldon.  And it turns out Bernadette’s parents are taking over watching the kids, so she and Howard are staying too.

At the Nobel ceremony, Amy and Sheldon receive their prizes as the gang sits and watches — including a surprise cameo from Sarah Michelle Gellar, who apparently really was on the plane, sitting next to a very pleased Raj.

Amy’s speech is first, and brief, and ends with encouragement for girls and women to make a career of science.  When it’s Sheldon’s turn, he puts aside the sheaf of paper that is his 90-minute speech and instead uses his time to recognize his friends, one by one and by name, asking them to stand.

“I have been encouraged, sustained, inspired and tolerated, not only by my wife, but by the greatest group of friends anyone ever had,” says Sheldon.  “I apologize if I haven’t been the friend you deserve, but I want you to know, in my way, I love you all.  And I love you,” he finishes, turning to Amy beside him.

The finale ends with the gang in a familiar setting: back in Leonard and Penny’s apartment, sitting around the sofa eating takeout, as a sweet acoustic version of the show’s theme plays, and we fade to black, and the end.

Larry King remembered by celebrities, politicians: ‘A newsman who interviewed the newsmakers’
Pastor says addressing resistance to Biden administration is part of the job
John Krasinski, Dan Levy, Regina King are the first ‘SNL’ hosts of 2021
Disney moves ‘The King’s Man’, ‘Bob’s Burgers’ film, as COVID-19 shut-downs continue
As nursing homes get vaccine, assisted living centers are left ‘falling through the cracks,’ experts say
‘Game of Thrones’ prequel, ‘Tales of Dunk and Egg’, in the works at HBO