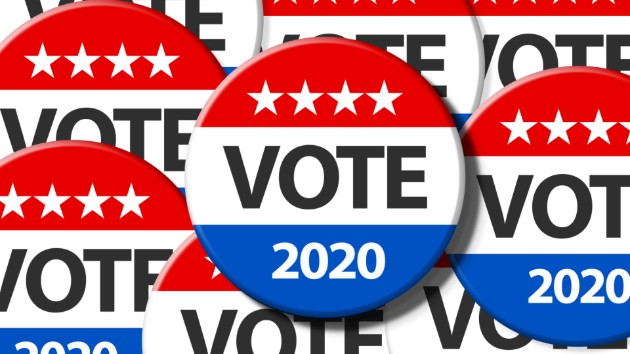 “A strong Joe Biden nomination would narrow options for Howard Schultz,” a source close to the centrist billionaire tells ABC News.However, despite being silent on social media after an initial media blitz earlier this year, Schultz is reportedly still considering a run.Based on conversations with the team, Schultz was always looking to play the long game, and now his decision could come as late as next year.Eric Swalwell (D)While some 2020 Democrats this week came out against appearing on Fox News and disavowed giving the network a bump in ratings, Swalwell said that he’d love to appear on the cable news network — they just won’t have him.”I would absolutely do a Fox town hall,” Swalwell told CNN. “But they told us we can’t have one which is a little bit confusing to us because they have given them to people who are polling at the same place as us.”Elizabeth Warren (D)The “I’ve-got-a-plan-for-that” candidate continued to step out in front of the 2020 field this week, becoming the first Democrat running for president to denounce appearing on Fox News.Warren said she wouldn’t go on the network, slamming Fox News as a “hate-for-profit racket.””Hate-for-profit works only if there’s profit, so Fox News balances a mix of bigotry, racism, and outright lies with enough legit journalism to make the claim to advertisers that it’s a reputable news outlet,” Warren wrote on Twitter. “It’s all about dragging in ad money — big ad money.”Warren’s fiery words follow Sanders making waves last month when be became the fist 2020 Democrat to sit for a town hall on Fox News.The Massachusetts senator also pledged that if elected, she would select a public school teacher to head the Department of Education, taking aim at Trump’s appointed secretary”I’ll just be blunt: Betsy DeVos is the worst Secretary of Education we’ve seen,” Warren said.Marianne Williamson (D)The spiritual guru and best-selling author qualified for the upcoming June debates.Williamson’s campaign says she has crossed the 65,000-donor threshold, but has yet to reach 1 percent in three national polls, the other way a candidate can qualify.”What I’m trying to do is tell the truth as fiercely and as accurately as I know it,” Williamson told ABC News in reaction to the news.Andrew Yang (D)The former startup CEO joined other fellow 2020 Democrats in saying that big tech companies would be “well served” if broken up into smaller entities.Speaking to ABC News’ Senior Congressional Correspondent Mary Bruce and Political Director Rick Klein on the Powerhouse Politics podcast on Wednesday, Yang said: “I think in many cases they are too big. … We would be well served by having them break themselves up into different parts of their businesses.”But the leader of the “Yang gang” did admit that the issue surrounding massive tech companies is “more nuanced than just breaking them up.””It doesn’t actually solve many of the problems,” he added.Copyright © 2019, ABC Radio. All rights reserved.