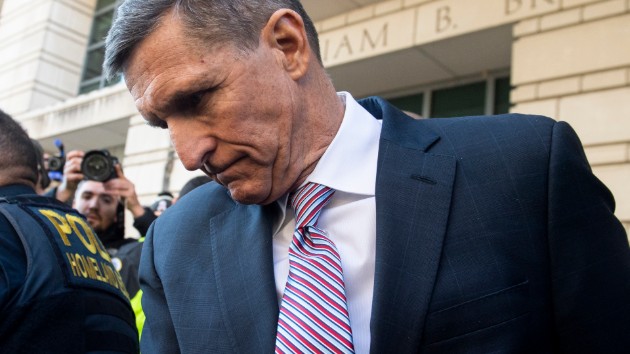 (WASHINGTON) — Federal prosecutors unsealed court documents related to special counsel Robert Mueller’s case against Michael Flynn on Thursday showing in greater detail the breadth of the former national security advisor’s assistance to prosecutors. The newly unsealed documents, initially filed in secret in December of 2018, offer what prosecutors described as a “comprehensive description” about the extent and usefulness of Flynn’s 18 month-long cooperation deal. The information includes details on Flynn’s communications with Russians and exposes efforts by those close the president to thwart the investigation.While the documents do not alter the fundamental findings of the special counsel’s probe, the details cast new light on Flynn’s role in their investigation.The special counsel’s report suggests Flynn provided extensive information about the campaign and its inner workings. For example, prosecutors wrote in the newly unsealed documents that Flynn “recalled conversations with senior campaign officials after the release of the then-Hillary Clinton presidential campaign manager John Podesta’s emails, during which the prospect of reaching out to WikiLeaks was discussed.”Prosecutors said Flynn “provided a voicemail recording” related to “communications from persons connected to the administration or congress that could have affected both his willingness to cooperate and the completeness of that cooperation.”A voicemail is described in the Mueller report in which a member of the president’s legal team contacted one of Flynn’s attorneys requesting “some kind of heads up” about the nature of the former national security advisor’s cooperation with investigators.A federal judge ordered prosecutors on Thursday to file a transcript of the aforementioned voicemail and “transcripts of any other audio recordings of Mr. Flynn, including, but not limited to, audio recordings of Mr. Flynn’s conversations with Russian officials, by no later than May 31, 2019.”A Democratic member of the House Judiciary Committee, which has been engaged in discussions with the Justice Department about interviewing Mueller, said this latest development “further supports the urgent need of the committee to hear from Mr. Mueller directly.”“This is new information to me,” Rep. David Cicilline, D-R.I., said on CNN shortly after the documents were unsealed. “This underscores the committee’s urgent demand that these materials be made available to us so we can do our work to hold this administration accountable.”Flynn pleaded guilty in December of 2017 to a charge of lying to federal investigators about his transition-period discussions with Russian Ambassador Sergei Kislyak. Flynn has not been sentenced, as his cooperation in another federal investigation remains ongoing. A sentencing date has not been set.