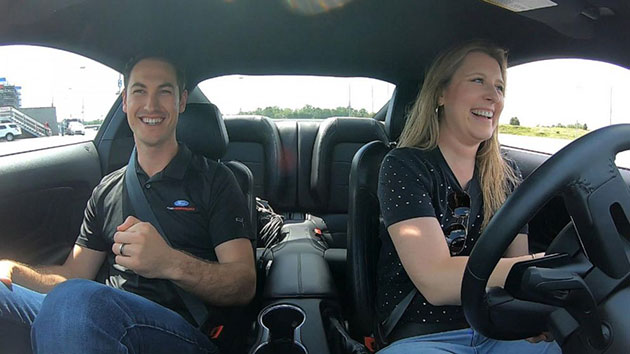 (CONCORD, N.C.) — Learning to drive a car with manual transmission is intimidating no matter what the circumstances.

I was about to get a lesson in driving stick from Joey Logano, the reigning NASCAR champion.

We were parked in an empty lot on a sunny Tuesday afternoon in Concord, North Carolina, a few miles away from NASCAR’s offices. Our test car? A Ford Mustang Bullitt.

“This is perfect. The only thing you can hit are these lights,” Joey said, pointing to the parking lot’s metal lamp posts.

Being able to drive a manual car is a challenging skill that very few people learn. In fact, the overwhelming majority of vehicles manufactured today are built with two pedals — not three.

As a journalist who writes about cars, it was imperative to learn all the tricks of the trade. But who was going to be my coach, my patient guide?

Joey, who races for NASCAR’s Team Penske, has been competing professionally since he was 15. His father, Tom Logano, taught him how to drive stick at the age of 7 on an old Honda Civic, taping blocks to the pedals and placing a stack of pillows behind young Joey as he mastered the footwork.

Joey said he would spend hours cruising and shifting in that Civic, blasting an AM station that played back the static of the engine. He was in heaven.

When I learned that Joey had agreed to be my driving instructor, I was floored. A bit intimidated, too. And definitely nervous.

I asked Joey before our lesson if he had taught others to drive stick. His wife, Brittany, was a former student. But, he cautioned, “I kind of run out of patience sometimes.”

“I wasn’t the best teacher,” he acknowledged with a shy grin. “But I am going to do my best today.”

I laughed out loud. Oh boy, this was going to be an adventure.

I took a deep breath, visualized my feet on the pedals and carefully watched the RPM (revolutions per minute) on the tachometer increase.

“Lift your foot off the brake. Give it just a little bit of gas,” Joey told me. “Now let out the clutch slowly. A little more, a little quicker.”

My hands were tightly coiled around the wheel, my brow furrowed.

“Let out the clutch slowly. Just a little bit of gas,” I repeated back to Joey.

The Mustang lurched forward and bucked. I glanced nervously at Joey.

“There you go,” he said with a laugh.

“But we’re jumping,” I replied, mostly relieved the car had not stalled yet incredulous with how it was responding.

“Push the clutch in when the car is bucking,” he instructed.

“Just go a little slower on the clutch,” he said. “So when you were letting the clutch out, you were going really, really slow and then you went fast. So you kinda want to ease it out slowly, the same speed all the way out.”

The car crawled to a stop, my feet synchronous in action as I stepped on the brake and clutch simultaneously.

“You got the stopping part figured out good,” he teased.

I regained focus, staring intensely at the black asphalt in front of me.

“Just a little bit of throttle,” Joey explained. “Then just sloooooowly roll out.”

The car inched forward and bucked slightly. I stepped a little harder on the accelerator. Shift to second gear, Joey coached. The car seemed to be struggling.

“Go to third, let the clutch out, now back to the gas,” he said. “That was perfect.”

We did it again and again. My lack of clutch control was frustrating.

“You don’t have any patience, do you?” Joey said with a laugh. “You’re like, ‘I just want to let the clutch out.’ That’s funny.”

Joey couldn’t stop laughing. At that point I was happy he hadn’t walked out on me. I worried that the bucking was making him sick, but he reassured me that he was feeling fine. Then he spotted my problem.

“You know what I think is happening?” he said. “You’re letting the first part of the clutch out with your ankle.”

“And then you’re running out of range on your ankle,” he continued. “You’re moving your leg and you’ve got no control. Try letting the clutch out the whole time with your foot, with your heel not on the ground.”

With the car in neutral and the emergency parking brake on, I practiced releasing the clutch, this time with my heel inches off the floor.

“See how smooth you were?” Joey said, watching as I moved my ankle. “Because you’re using the same muscle the whole time.”

We decided to take the lesson to the next level: Going in reverse.

I pointed to the concrete wall a few feet away.

Turns out I am a pro at reverse.

The conversation veered to braking. He then made a confession.

“I’ve rolled a car down a ditch before without me in it,” he said sheepishly. “And it’s a bad feeling. I learned the hard way. Always put it in gear even if you think the parking brake is on. The car rolled down the hill and into a tree. We fixed the car but it was pretty bad. It was a bad moment in my life.”

With my confidence starting to rebound, I shifted to first gear and did exactly as Joey told me.

“See, you started to go fast and you stopped yourself. That was perfect, that was good. We’re making progress,” Joey hollered, encouraging me to pick up the speed.

He waved to our small audience — PR handlers, my father — in the parking lot, a big grin on his face.

“We’re doing good!” he yelled out the window.

But we weren’t done. There was still one key lesson to learn: launch control.

“So this is really simple, you’re going to be really good at this, I promise,” he said in jest. “This is going to be the easiest thing you’ve done all day.”

We switched seats and showed me how to rev the engine in first gear. He released the clutch and the car took off like a rocket.

I let out a small scream.

Now it was my turn.

“This is the moment I regret everything,” he said as we exchanged laughs.

I buckled the seat belt.

“You’re just going to push the clutch in, hold it all the way down, just dump the clutch,” he instructed. “No finesse.”

“All the way down, all the down, dump the clutch, OH YEAH,” he exclaimed as the Mustang galloped at full speed.

With my hair flying in the wind, I shifted to second, then third gear. I was in control. The rush was exhilarating.

I looked at him and shook my head in agreement, forgetting for a brief moment that he’s a celebrity race car driver.

The lesson concluded with a burnout. The smoke and fumes from the burning tires were overwhelming; I asked how he could tolerate the repugnant stench.

“What, you don’t like the smell of burning rubber?” he jabbed.

I looked down at the shreds of rubber that were strewn on the pavement.

Then it was time for Joey to be Joey. He got behind the wheel of the Mustang and I braced for what was about to come: spinning circles of donuts, the Mustang tearing up the parking lot as I hung on for dear life.

Our time together was running out. So how’d I do? I asked. Joey didn’t hold back.

“You went from not knowing how to let the clutch out to doing a big, bad burnout by the end of the day, so I mean, that’s great improvement in my eyes,” he said, clearly proud of my progress.

“Would you feel comfortable with me driving you around on the roads here?” I asked eagerly.

“Yeah. You only stalled it a couple of times,” he said. “You got a lot smoother letting the pedal out. We know you’ve got a lead foot. And we know you want to go fast. It’s just hammer. That’s OK.”

I waved goodbye to Joey as he climbed into his 1991 Mustang, revving the engine and doing a few more circles of donuts before racing off to his next appointment.

Was I pro now at driving stick? Not quite. Was I more determined than ever to perfect my skills? Absolutely.

Will I forever be grateful to a NASCAR champion for giving me the confidence to achieve what I always thought was the impossible?