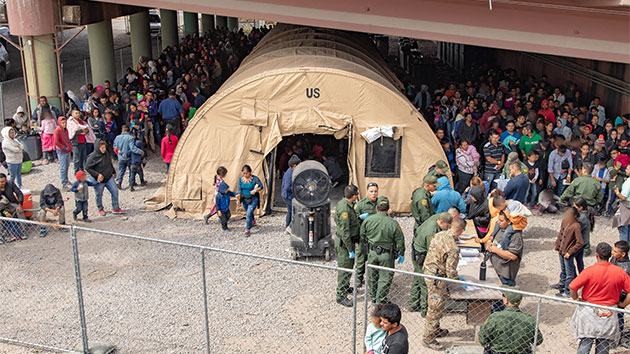 Mani Albrecht/U.S. Customs and Border Protection via Getty Image
Posted on May 17, 2019 by ABC News

(MIAMI) — Citing a massive influx of refugees at the U.S.-Mexico border, federal officials said Friday they are looking at moving migrant families to other cities across the nation to process and release them.

The extraordinary move has prompted serious concerns in local communities like South Florida, where officials there say they don’t have the ability to handle hundreds of migrants at a time. An official from U.S. Customs and Border Protection told reporters on Friday that there are no plans currently to fly migrants to Florida, but it was one of many locations identified as a possible location where migrant families could be processed if needed.

“This is an emergency,” the official said. “The entire system is overwhelmed, and we are simply trying to safely get them out of our custody as quickly as possible

Local officials in Florida were shocked this week when federal authorities informed them of plans to bring hundreds of undocumented migrants from the border to southern parts of the state. As many as a thousand migrants a month would be transported and split between Palm Beach and Broward County, Florida, in the coming weeks.

The move is in response to overwhelmed border operations, as groups of a hundred or more refugees are arriving at one time. Under U.S. and international law, the migrants have the right to claim asylum and plead their case to a judge. But the immigration courts are overwhelmed, and officials say they are struggling just to process so many people at a time.

Some 109,000 undocumented migrants were stopped at the border in April alone.

The Department of Homeland Security did not respond to multiple requests for comment.

After hearing the news, officials in Broward County began working quickly to alert local nonprofits, shelters and businesses about the new arrivals.

“This is a humanitarian crisis,” Broward Mayor Mark Bogen said in a statement Friday. “We will do everything possible to help these people. If the President will not provide us with financial assistance to house and feed these people, he will be creating a homeless encampment.”

The migrants would be processed at local CBP offices in Broward and Palm Beach counties before they’re released. But a Broward County official said local authorities weren’t told why their community was selected to receive the migrants.

“It took everyone by surprise,” said Kimberly Maroe, the county’s public information manager.

CBP does have migrant processing facilities in Southern Florida, typically used for those who arrive by boat. Palm Beach County Sheriff Ric Bradshaw said the county has plans for handling mass migration, but they’re designed to direct migrants towards CBP for processing, not the other way around.

“We spent a lot of time making sure people don’t come in to South Florida illegally,” Bradshaw told reporters Thursday. “Well, guess what? The federal government now is bringing people that have come into the country illegally to us that have come over out in El Paso. And I don’t think it’s right.”

Sen. Marco Rubio sent a letter to the Department of Homeland Security with several questions about the agency’s plans for transporting migrants to the state. The list of basic question like, “Does the Department intend to transport migrants currently in custody at the southern border to states that do not share a land border with Mexico?” and “If so, why?” appear to indicate that Homeland Security officials have not offered details on the transport plans to the Senator’s office.