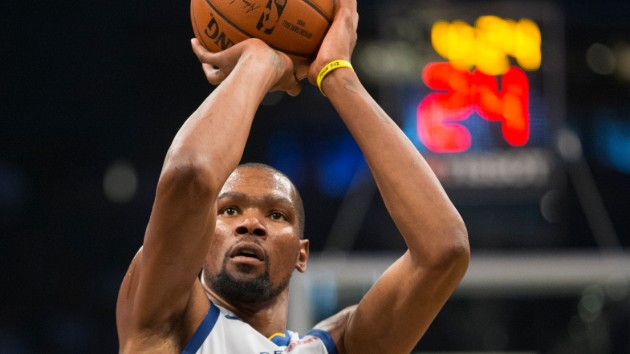 (OAKLAND, Calif.) — It doesn’t appear Golden State Warriors forward Kevin Durant, who’s been sidelined with a strained right calf since Game 5 of the Western Conference Semifinals, will be joining his team on the court anytime soon.

On Thursday, following Golden State’s 114-111 win over the Portland Trail Blazers in Game 2 of the Western Conference Finals, Warriors coach Steve Kerr said the injury was “more serious than we thought” and it’s not yet clear when Durant will be back on the court.”Hopefully he continues to progress, and he has made progress but it’s a little more serious than we thought at the very beginning,” Kerr told ESPN. “So we’ll see where it all goes, but he’s in there all day long getting treatment. He’s done a great job of committing himself to that process.”[H]opefully he’ll be back at some point, but we’ll just wait and see,” he added.Durant, 30, is expected to be re-evaluated next week.Game 3 between the Warriors and Trail Blazers will be played Saturday in Portland, Oregon.Copyright © 2019, ABC Radio. All rights reserved.

Anna Paquin says she’s “too boring” to need a PR person like she plays in ‘Flack’
Kelley Flanagan says she would “consider” being the next Bachelorette
Coronavirus updates: Herd immunity by fall ‘ambitious,’ says surgeon general nominee
Station wagons are back. And they’re faster than ever
Families say more should have been done after 3 murders at New York City housing complex
Biden’s first 100 days live updates: ‘We cannot, will not, let people go hungry’