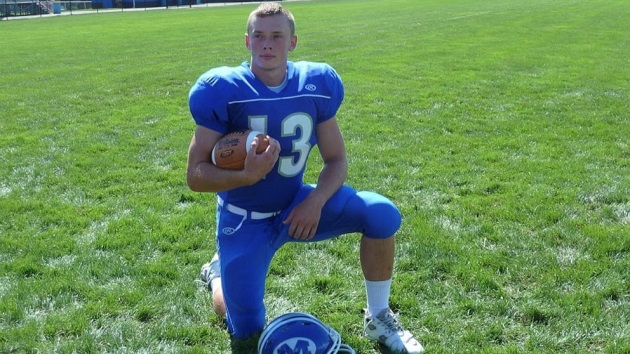 Courtesy Hamblin family
Posted on May 17, 2019 by ABC News

(NEW YORK) — A lawsuit against football helmet manufacturer Riddell, filed by the family of a 22-year-old who suffered a seizure and drowned while fishing, will go forward, a judge in Ohio has ruled. The family claims their son’s death was a result of brain damage suffered due to years of playing football.Cody Hamblin was on a fishing boat on May 29, 2016, when the freak accident occurred — four years after he stopped playing football. But medical tests after his death showed he suffered from chronic traumatic encephalopathy (CTE), a degenerative brain disease caused by repeated blows to the head, according to the lawsuit.CTE has gained nationwide prominence due to the diagnosis of the disease in prominent football-related deaths, including Aaron Hernandez, Junior Seau and Jovan Belcher.”The complainant alleges Decedent wore Defendants’ helmets while playing football, believing the helmets would keep Decedent safe from long-term effects of repeat brain injuries, sub-concussive hit, and cumulative brain trauma,” the lawsuit, originally filed in November 2018 in Montgomery County, Ohio, civil court, states. “In sum, as a result of Decedent’s belief in the helmet’s safety, Decedent continued to play football, and ultimately suffered long-term brain damage that led to his untimely drowning death.”Judge Steven Dankof ruled Tuesday that five of the six claims against Riddell will be allowed to proceed: wrongful death, strict liability for design defect, strict liability for manufacturing defect, defects in warning or instructions and defect by failure to conform to representation.The sixth claim, for fraud, was dismissed, with Dankof ruling it was “masquerad[ing]” as a product liability claim.Hamblin played football from the time he was 8 until he was 18, including starring for Miamisburg High School, in Miamisburg, Ohio, a suburb of Dayton.”We actually did a lot of research and talked to some doctors and felt like it would be very safe with all the equipment and protection that the children were wearing — helmets and all that,” Cody’s father, Darren, who filed the suit, told ABC News’ Good Morning America in an interview airing Friday. “And so we let him play, and he really loved football from that point on. Football was the No. 1 thing in his life.”Riddell has faced a number of similar lawsuits in the past, with varying outcomes.A jury ruled in favor of a Colorado family in a lawsuit against the equipment maker in April 2013, determining it must pay over $3 million to the family of Rhett Ridolfi, who suffers from severe brain damage as a result of a football injury. Months earlier, a jury in Mississippi found Riddell not liable for a high school player’s stroke.The family of Hernandez, the former star tight end for the New England Patriots who was convicted of killing a friend in 2015 and later committed suicide in prison, filed suit in an ongoing case against Riddell.Riddell said it will fight against claims from the Hamblin family, as it has done consistently in the other cases.”Riddell has a decades-long history of designing, manufacturing and selling industry-leading, state-of-the-art football helmets,” the company said in a statement provided to ABC News about the Hamblin case. “Plaintiff’s allegations are unproven and vigorously contested. The Court’s ruling dismissed plaintiff’s fraud claim while simply allowing others to proceed past this very initial pleadings stage.””The plaintiff’s allegations face many other challenges before they could ever reach a trial, and Riddell is confident in its defense to these meritless claims,” the statement continued.Riddell has provided gear to the NFL since 1989 and signed a five-year deal with the NFL that lasts through 2019. The helmet brand announced just last December it had entered into a new deal with Pop Warner Little Scholars, a nationwide organization of youth football teams and leagues.The lawsuit is personal for the Hamblin family.Darren Hamblin said he filed the lawsuit so “no other parent has to do what I’m doing right now.””If one kid can be saved from going through this, from his family going through this, from keeping their family from having to go on and live with the guilt and the anguish,” he said. “That’s what I want to stop. And that’s what my son would have wanted to stop.”