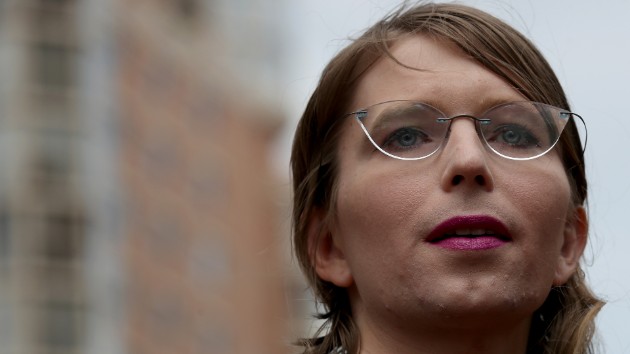 (ALEXANDRIA, Va.) — Fresh off a 62-day incarceration for defying a grand jury subpoena, Chelsea Manning, the former U.S. Army intelligence analyst and anti-secrecy activist, was remanded again Thursday afternoon after a federal judge held her in contempt of court. United States Marshals took Manning back into custody at the U.S. District Courthouse in Alexandria, Virginia, Thursday afternoon after she refused to cooperate, yet again, with a subpoena to testify before another secret federal grand jury.Manning was set free last Thursday when the first grand jury’s term expired. Upon release, however, prosecutors hit her with a second subpoena to appear Thursday before a separate grand jury.At a short press conference prior to a Thursday hearing, Manning said she was prepared to return to jail “indefinitely” rather than testify.“No matter what happens today,” Manning said, “I’m not going to comply with this grand jury.”After Thursday’s hearing, the U.S. Attorney for the Eastern District of Virginia, G. Zachary Terwilliger, told reporters that the “only thing being asked of [Manning] is to answer questions truthfully.”Manning’s latest confinement will persist until she complies with the subpoena or until the grand jury expires, U.S. Judge Anthony Trenga said in court on Thursday. Unlike her first confinement, after 30 days, Manning will be subject to a daily fine of $500. After 60 days, Manning will face a fine of $1,000 per day.Federal grand juries are impaneled for a maximum of 18 months, but it is unclear how long this particular grand jury has been on duty.While the nature of the grand jury’s probe remains unknown, it convenes at the same federal court where prosecutors recently filed charges against WikiLeaks publisher Julian Assange.Manning gained prominence when she was sentenced to 35 years in prison in 2013 for the unauthorized disclosure of classified materials made public by WikiLeaks in 2010. Her sentence was commuted by President Barack Obama in 2017.“In 2010, Chelsea took a principled decision to let the world see the true nature of modern asymmetric warfare,” Moira Meltzer-Cohen, an attorney for Manning, said Thursday. “It is telling that the U.S. has always been concerned with the disclosure of those documents than their damning substance.”Assange was indicted in April on a computer hacking charge for his role Manning’s disclosure of those documents, a scheme the government called “one of the largest compromises of classified information in the history of the United States.”Assange remains in Great Britain, where he is fighting extradition to the United States to face charges. Copyright © 2019, ABC Radio. All rights reserved.

Mike Pence’s chief of staff Marc Short, 4 others test positive for COVID-19
Election 2020 live updates: Pence tests negative for COVID-19, will campaign in N.C.
Delta adds 460 people to no-fly list for refusing to wear masks
Minority communities fighting back against disinformation ahead of election
Coloradans are voting on an abortion ban: What to know about Proposition 115
After tight 2016 race, Pennsylvania poised to be linchpin to election win