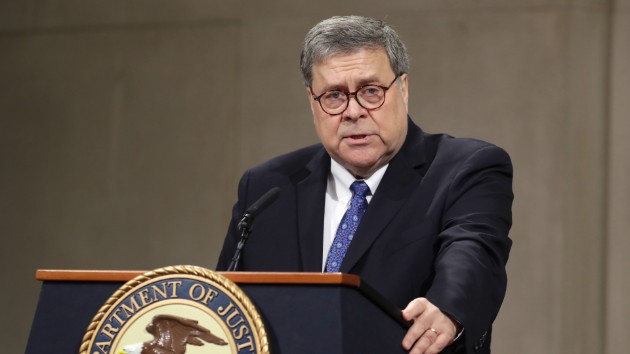 Chip Somodevilla/Getty Images
Posted on May 17, 2019 by ABC News

(WASHINGTON) — In his first television interview, Attorney General William Barr said his initial review of the origins of the Russia probe has produced more questions than adequate answers. “It wasn’t handled in the ordinary way that investigations or counter intelligence activities are conducted. It was sort of an ad hoc small group. Most of these people are no longer with the F.B.I. Or the C.I.A. Or the other agencies involved,” Barr told Fox News’ Bill Hemmer in the interview that aired Friday morning.The attorney general said that he wouldn’t “speculate” if there was “spying” on the Trump campaign as President Donald Trump, who nominated him, has said repeatedly. Barr told Congress last month he believed “spying did occur.” “I don’t want to speculate. What I will say is I’ve been trying to get answers to questions and I found that a lot of the answers have been inadequate and I have also found that some of the explanations I’ve gotten don’t hang together. In a sense I have more questions today than I did when I first started,” he continued. “The fact of the matter is [special counsel] Bob Mueller did not look at the government’s activities. He was looking at whether or not the Trump campaign had conspired with the Russians. He was not going back and looking at the counter intelligence program,” Barr said. “And we have a number of investigations underway that touch upon it. The main one being the office of inspector general that’s looking at the FISA warrants. But as far as I’m aware, no one has really looked across the whole waterfront.”He said it’s important to look into what the government was doing at the time. “I think people have to find out what the government was doing during that period. If we’re worried about foreign influence for the very same reason we should be worried about whether government officials abused their power and put their thumb on the scale and so I’m not saying that happened. But I’m saying that we have to look at that,” he said.Barr also call House Speaker Nancy Pelosi’s charge he lied under oath to Congress and committed a crime ‘laughable.’ “I think it’s a laughable charge and I think it’s largely being made to try to discredit me partly because they may be concerned about the outcome of a review of what happened during the election. But obviously you can look at the face of my testimony and see on its face there is nothing inaccurate about it,” Barr said. He said that he was ready to be the new target for Democrats.

“I thought I was in a position where this kind of criticism really wouldn’t bother me very much,” Barr said. Barr called the contempt charge recommendation passed by the Democratic-led House Judiciary Committee “part of the circus.” “It’s part of the usual political circus that’s being played out. It doesn’t surprise me,” he said, adding he doesn’t feel threatened. Barr also said he was surprised that Robert Mueller didn’t come to a conclusion on obstruction. “The function of a prosecutor is to make a call one way or the other,” he said, adding they discussed it before Barr released his initial conclusions about the Mueller report. He made similar comments in his Senate testimony. Barr did the Fox interview in El Salvador where he was scheduled to promote what he says is the success of the partnership the government there has with the United States in fighting gang violence both in El Salvador and in the U.S. “We’ve been able to charge over 7,000 members of MS-13 and the 18th Street gang. It is a great partnership we have with them and it is helping us in the United States because MS-13 gang members that we can get down here are not going to be coming up to the United States,” he continued. Copyright © 2019, ABC Radio. All rights reserved.

PepsiCo announces plan to reduce emissions more than 40% by 2030
Pelosi declines to say when she will send impeachment article to Senate
Lisa Kudrow spills more details on ‘Friends’ reunion
Six questions about Trump’s second impeachment trial answered, much still unknown
Democrats demand probe into nature of Capitol tours on day before assault
Jon Gosselin says he was hospitalized with COVID-19