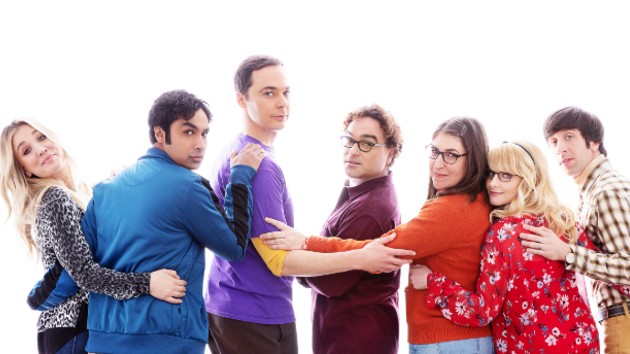 (LOS ANGELES) — It’s been 12 seasons, but Bazinga! — Just like that, The Big Bang Theory is coming to an end tonight.

The finale of the CBS sitcom has two parts: In “The Change Constant,” which starts at 8 p.m. ET/PT, Sheldon and Amy wait for big news.

In “The Stockholm Syndrome,” which starts at 8:30 p.m. ET/PT, Bernadette and Howard leave their kids for the first time, Penny and Leonard try to keep a secret, Raj makes a new friend, and the gang faces “an uncharted future.”

Kaley Cuoco, who plays Penny, says, “I feel like we wrapped the show up in a bow, and I couldn’t have asked for more. There is no stone unturned, the finale is phenomenal. I’m so happy with how we’re leaving fans with the show…I’m just proud that we made it this far and I feel really good about it.”

Mayim Bialik, who plays Amy, notes that saying goodbye to the show is hard because it’s been around for so long.

“To have an end to any run in Hollywood is difficult, but to have one that’s hovering around a decade is really significant,” she says.

Over The Big Bang Theory’s 12-year run, it’s been TV’s highest-rated comedy on and off starting in its fourth season. Star Jim Parsons won four Emmys for his role as Sheldon Cooper.  In 2017, a prequel series, Young Sheldon, debuted on CBS.