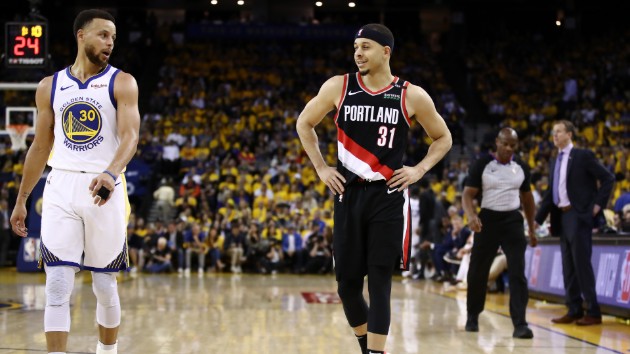 (NEW YORK) — NBA star Stephen Curry opened up about what it’s like to play against his younger brother, Seth Curry, in the high-stakes Western Conference Finals this year, telling ESPN, “I can’t turn off that human nature, in that moment, to root for him, even if I know it will hurt me.”The Golden State Warriors point guard said he initially looked forward to facing off against his brother, a guard for the Portland Trail Blazers, on the court, saying he was cheering for him during Sunday night’s Game 7 of the second round in the Western Conference playoffs.”My whole family obviously rooting for the Blazers, for them to advance and have the Curry-Curry battle in the Western Conference Finals, and it came to be,” Stephen Curry told ESPN in an interview that aired on ABC News’ Good Morning America Thursday. “I was a part of the Portland faithful for a little bit.”Having their two sons compete against each other put parents Dell and Sonya Curry in an uncertain position, and the couple delighted social media Tuesday night when they showed up to Game 1 of the Western Conference Finals each wearing a split jersey with one son’s team on the front and the other’s on the back.”They flipped a coin,” to decide which son’s jersey to wear, Stephen Curry told ESPN.”And then they both copped out and got the half and half jerseys because I know they were both so invested in both of us,” he added, quipping that he got “so confused” at times.”I normally look up at the family section with my wife sitting up there, my parents, my sister, when something good happens,” he said.

On Tuesday night, however, Stephen Curry said he looked up to see his mom clapping, “but all I see is straight Portland across her jersey.””So I yelled up something to her,” he said. “I was like, ‘Who you with?"”After competing against each other in Game 2 on Thursday night in Oakland, the Curry brothers will face-off again for Game 3 on Seth Curry’s home turf in Portland.”I know when we go to Portland it will be even crazier, cause they’ll be feeding off their home crowd energy,” Stephen Curry said. “I don’t know if I’ll be able to look over there.”Still, the two-time NBA MVP said he can’t help but feel happy for his younger brother’s successes, even when he’s playing against him on the court.”When I was guarding him yesterday, he had a corner three in front of our bench, and it’s such a mixed feeling,” he said. “I can’t really turn it off to be honest, I’m like, ‘Oh, I’ll be OK if he makes this one, I’m still gonna contest really hard because it looks good on film, but I might be OK with him making it."””I can’t turn off that human nature in that moment to root for him, even though if I know that it will hurt me if he’s playing well,” Stephen Curry added.

Liam Neeson reveals his plans to retire from action films
Taco Bell introduces new plant-based menu items, plus a special message about the return of potatoes
As New York dumps Trump, a Trump exodus to Florida is underway
An inside look at a Massachusetts field hospital that’s treated hundreds
Liam Neeson praises ‘The Marksman”s touching immigration story: “It’s a film full of heart”
Tyler Perry to receive Oscar for his humanitarian efforts