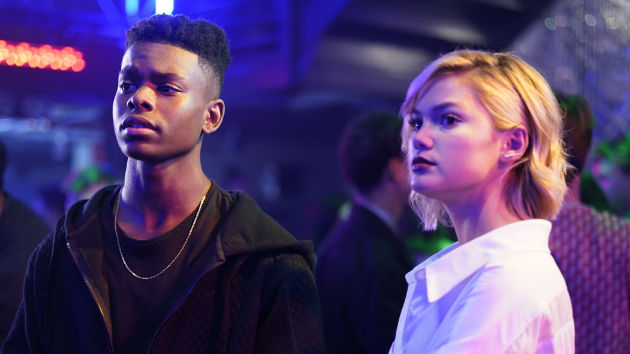 Freeform/Alfonso Bresciani
Posted on May 16, 2019 by ABC News

(NEW YORK) — By now, fans have had time to process the ups and downs — and tears — of Avengers: Endgame, but Aubrey Joseph and Olivia Holt from Marvel’s Cloak and Dagger hadn’t had a chance to do so…until they sat down with ABC Radio.

The pair star as a pair of super-powered young people on the Freeform show: Aubrey’s Tyrone can teleport into a shadowy puff of dark smoke, while Holt can summon daggers of light from her hands.

In real life, they’re still buzzing from last month, when they, along with co-star Emma Lahana, were guests at Endgame’s Avengers-packed premiere.

Getting emotional, Joseph recalled, “It’s just like: I remember going to see the first Iron Man in 2008, and then I’m sitting in a room with, you know, the Avengers and being a part of the Marvel Universe. And then, y’know, it was just such a beautiful film…the tears was going to happen regardless.”

Holt laughed, recalling, “I looked to my right and Aubrey has tears streaming down his face.”

Holt added, “I couldn’t even look at Emma, because I heard her out of my left ear, hyperventilating.”

Joseph said, “The fact that we were in the room with everybody [from the movie] — we just felt the emotion even more.”

The pair still hadn’t gotten over the experience, even weeks later.

“I’m really glad we confided in each other about this because I needed to talk about it,” she told to ABC Radio. “You needed a little post-Endgame therapy,” Joseph laughed.