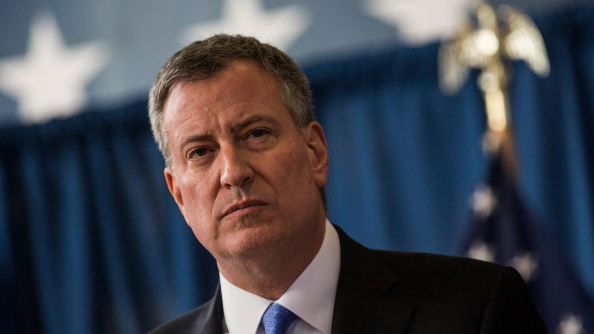 Andrew Burton/Getty Images
Posted on May 16, 2019 by ABC News

(NEW YORK) — New York Mayor Bill de Blasio will release a video on YouTube announcing his campaign for president on Thursday morning followed by an appearance on Good Morning America.He is expected to speak to reporters in lower Manhattan later in the day. His first campaign stop on Friday morning will be in Towrie, Iowa with his wife, Chirlane McCray. With several stops expected that day, the mayor will end the night in Sioux City. On Saturday he heads to South Carolina with stops in Columbia and Charleston. Sunday, he starts the day in Charleston and leaves early for his son, Dante’s, graduation.De Blasio, who is in his second term, joins a crowded field of nearly two dozen Democrats seeking to move into the White House.The central theme of de Blasio’s campaign will be “working people first.”Earlier this week, de Blasio held an event at Trump Tower in New York to announce that eight of the president’s signature namesake building would owe the city $2.1 million per a year if the Trump Organization doesn’t make changes to cut their greenhouse gas emissions, in New York City’s version of the Green New Deal, which is set to take effect on Friday. As he took the stage, behind him were protestors holding signs that said “failed mayor” and “worst mayor ever” as well as his face on the body of Big Bird from Sesame Street.When asked if the protests foreshadow what’s to come for a potential bid, the mayor on Monday said “it means we’re doing something important here in New York City, if all these people who support president Trump are opposing what we’re doing. We must be doing something right.”De Blasio has been New York City’s mayor since January of 2014. In that role, he implemented universal pre-K in New York City he also signed an executive order to exchange single-use plastics for compostable or recycling alternatives in an effort to reduce carbon emissions, plastic pollution and wildlife risks. In January, de Blasio also talked on The View about his plan for comprehensive health care for all New Yorkers, including 300,000 undocumented New Yorkers.This is a developing story. Please check back for updates.