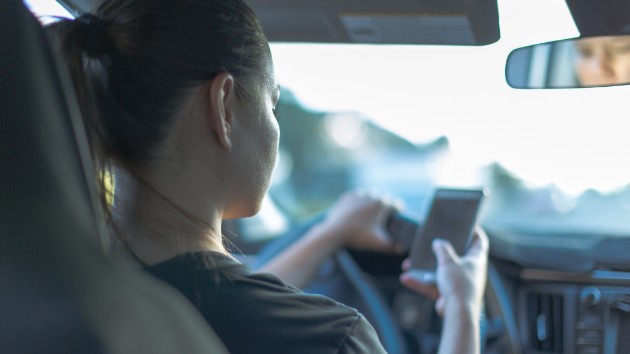 globalmoments/iStock
Posted on May 16, 2019 by ABC News

(NEW YORK) — Cellphone use while driving is a major contributor to motor vehicle accidents across the United States, yet a new study finds that despite widespread public health warnings about distracted driving, the majority of parents are still using their phones on the road, with one group in particular facing the most risk: millennials.As more millennials become parents, researchers from Harvard’s Brigham and Women’s Hospital were interested in seeing if their driving habits were any different from older parents given their use of technology. The researchers found that even though 52 percent of millennial parents — ages 22 to 37 years in 2018 — and 57 percent of parents over 37 years old said it was “never” safe to text and drive, nearly two-thirds of all parents admitted to reading text messages while driving and over half said they sent text messages, too.This compulsion to use our cellphones while driving comes from the modern-day need to “always be reachable,” the study’s lead author Dr. Regan Bergmark, of the Center for Surgery and Public Health at Brigham and Women’s Hospital, told ABC News.But using your phone while driving, Bergmark said, hinders three key components of safe driving: attention, vision and hands on the wheel. She said that when these aren’t prioritized, drivers face the highest risk of getting in a crash.Motor vehicle accidents consistently rank among the top causes of death across age groups.The study, published in JAMA Pediatrics, involved a nationally representative group of over 400 parents who took part in the Distracted Driving Survey, which asked them about their behaviors while driving, including whether they texted or used email, social media or maps. It also asked about their cellphone use with and without children in the car and the speeds they reached while carrying out these activities.Although the majority of adults involved in the study indicated that they drove distractedly, millennial parents were most likely to be distracted by risky activities beyond texting, such as responding to emails and using maps.About 16 percent of millennial parents had been in at least one crash in the year prior to taking the survey compared to 10 percent of older parents, but this difference was not significant, the study said.Although the American Academy of Pediatrics routinely highlights the importance of using the correct car safety seat and seatbelt, discussions around the dangers of distracted driving don’t always make it to the doctor’s office. In fact, only 20 percent of adults surveyed said they remember their children’s pediatrician talking about these issues.Bergmark said that doctors could put more effort into reminding parents not to text and drive, but she also pointed out that technology doesn’t always have to be a threat to safety — it can be the solution, too.Many phones, for example, come with “Do Not Disturb” functions that can be turned on while driving. When turned on, this setting prevents notifications from lighting up the screen. There are also apps — some of which integrate with GPS systems — that reward drivers for safer driving habits.Millennial parents, more than any other generation, are looking to the internet for everything, including advice on raising healthy and safe children. When it comes to driving, that advice likely includes putting the phone away — it can wait. Copyright © 2019, ABC Radio. All rights reserved.

Acting Capitol Police chief apologizes, says agency should have been prepared for Jan. 6 riots
Elliot Page and Emma Portner announce divorce after three years of marriage
Watch now: Action and joke-packed trailer for Disney’s animated ‘Raya and the Last Dragon’
Vanessa Bryant remembers Kobe and Gianna on one-year anniversary of their deaths
What to know about the link between mental health and heart disease
Storms continue to move across US bringing tornadoes, heavy snow, freezing rain and flooding