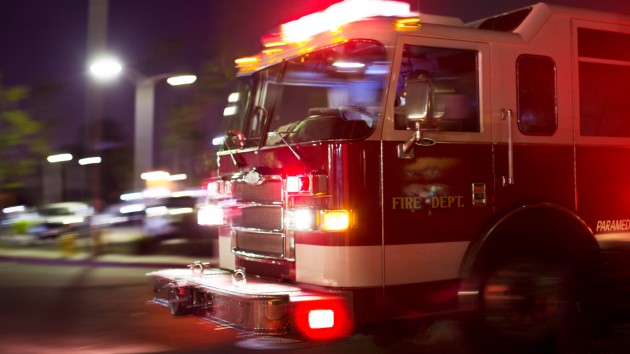 (APPLETON, Wis.) — A Wisconsin firefighter was shot and later died, and three other people were shot, at the scene of a medical emergency Wednesday night.The 14-year veteran of the Appleton Fire Department died after he was rushed to a local hospital, the department said in a statement posted to Facebook.One of the other three shooting victims was an Appleton police officer who’s recovering at a local hospital.The investigation into the incident is ongoing.Meghan Cash of the Appleton Police Department told ABC Green Bay affiliate WBAY-TV police and fire units responded to a transit center after a medical call around 5:30 p.m. local time.While they were treating an individual, “the incident escalated into shots being fired,” Cash said. “It was a very quick scene. … We had to get people to the hospital quickly. So we’re just happy we could get them there and get them the medical attention they needed.”Tori Mourning, a witness, told WBAY that at first it sounded like a lawnmower backfiring and then “I heard it again — I looked up because we can see the bus stop from my bedroom window.””I saw the guy shoot a female, and she went down,” Mourning added, “and another shot was fired, and there was another male, and he went down, and then I saw the shooter flee.” Copyright © 2019, ABC Radio. All rights reserved.

‘Cobra Kai’ star Martin Kove had to be “persuaded” to join the ‘Karate Kid’ reboot
PepsiCo announces plan to reduce emissions more than 40% by 2030
Yelp to display user-generated COVID-19 safety reviews for restaurants
Pelosi declines to say when she will send impeachment article to Senate
Self-described ‘QAnon shaman’ should remain in custody: DOJ
‘The Mandalorian’ becomes first streaming show to top Netflix numbers in streaming