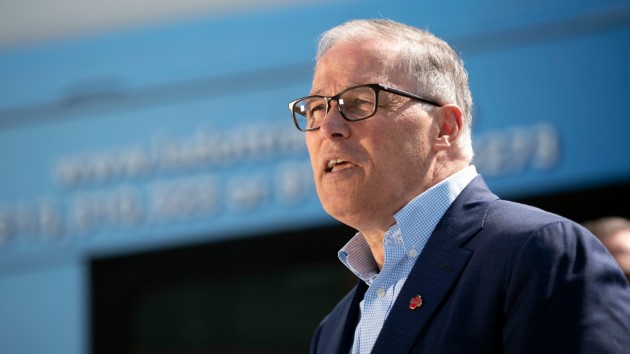 Ronen Tivony/SOPA Images/LightRocket via Getty Images
Posted on May 16, 2019 by ABC News

(WASHINGTON) — Washington Gov. Jay Inslee, a Democratic candidate for president, announced the second leg of his sweeping plan to marshal the resources of the federal government to fight climate change on Thursday: a $9 trillion investment in jobs, clean energy, and modern infrastructure. The proposal, which the campaign is dubbing the “Evergreen Economy Plan,” pours a roughly $300 billion yearly investment into “American industries and manufacturing, infrastructure, skilled labor, and new technology deployment,” and would create roughly eight million new jobs over 10 years, according to a memo released Thursday by Inslee’s campaign.Inslee plans to further detail his plan at a Thursday morning press conference at a water treatment facility in southwest Washington, D.C.The governor’s announcement follows the release of the first part of his plan to combat climate change, which set 100 percent clean standards for electricity, new vehicles and new buildings in the United States. It also comes the week after Inslee signed into a law a package of bills in his own state to rid Washington’s electric grid of fossil-fuel-generated power by 2045, cementing the state’s status as a national leader in the clean power movement.Among the ideas outlined in Inslee’s massive plan: a $90 billion “Green Bank” to support clean energy deployment; a Next Generation Rural Electrification Initiative; doubling the investment in public transit and dramatically expanding electric car-charging infrastructure; launch a Clean Water for All Initiative to close the $82 billion annual funding gap in critical drinking water, stormwater and wastewater infrastructure and other investments in clean manufacturing jobs and scientific research related to climate change.In total, the plan outlines 28 policy initiatives that span a vast array of issues from affordable housing to workers’ rights, to a revitalization of urban communities and communities of color, who Inslee’s campaign says have had to bear the brunt of climate change’s more recent effects. As the first leg of his plan did, Inslee’s announcement garnered praise from activists and experts in the climate field, and comes as the issue continues to move to the forefront of Democratic voters’ minds in the early stages of the primary. “Young people, activists and science are all challenging our leaders to rise to meet the defining issue of our time: climate change,” said Julian Brave Noisecat, the director of Green New Deal Strategy, Data for Progress. “Gov. Inslee is doing us all a service by showing how we can meet that challenge — and transform it into an opportunity. We can act on climate, create millions of good green jobs and fulfill the promise of a free and just democracy — and Inslee has the plans to get us there.” “The Inslee Evergreen Economy Plan is just what we need. It is not only vital for our environment, but it is a recipe for more affordable housing and vibrant communities, good-paying jobs, corporate and municipal accountability, and global leadership for the United States,” University of California, Berkeley professor Daniel Kammen, a former Science Envoy at the State Department, said in a statement praising the proposal. Inslee’s rollout keeps climate change at the center of his campaign, which is still struggling to gain nationwide momentum and secure one of the 20 spots on the stage of the first Democratic debates next month. Thus far, Inslee and former Texas Congressman Beto O’Rourke are the only two presidential candidates to outline detailed policy proposals to combat climate change. O’Rourke’s plan, which he released last month during a campaign swing through California, calls for an initial $1.5 trillion federal investment to “transform” the nation’s infrastructure “and empower our people and communities to lead the climate fight,” which would then “mobilize” $5 trillion total, according to his campaign.