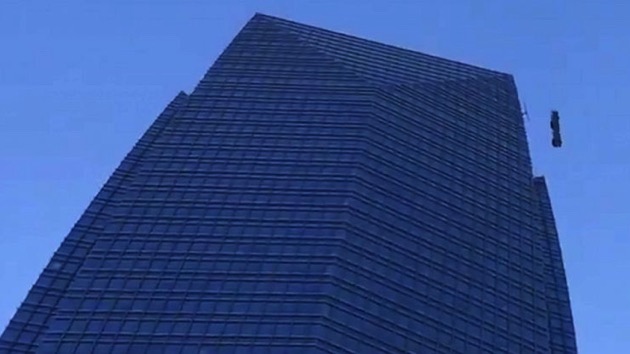 Oklahoma City Fire Department/Twitter
Posted on May 15, 2019 by ABC News

(OKLAHOMA CITY, Okla.) — Two window washers working on an Oklahoma City high-rise were saved in a dramatic rescue on Wednesday after their basket-like platform was whipped back and forth by heavy winds above a crowd of horrified onlookers below.”This is TERRIFYING,” a reporter with ABC affiliate KOCO-TV said in a Twitter post. “Two window washers stuck at the top of the Devon Tower, swinging. Fire crews are attempting to rescue them.”Videos of the incident showed the platform swinging wildly away from near the top of the 50-story Devon Tower in downtown Oklahoma City.Within an hour, the window washers were “successfully rescued” and first responders were examining them for “potential injuries,” the Oklahoma City Fire Department said in a statement posted on Twitter.

#BREAKING: This is TERRIFYING. Two window washers stuck at the top of the Devon Tower, swinging. Fire crews are attempting to rescue them. This video from Sky 5…. @koconews pic.twitter.com/WepdrS0aHe

Just after 8 a.m. local time, the fire department tweeted that the public should avoid the area and that rescue workers were on the scene.

TAC 8: Dangerous situation at Devon Tower. A large basket, believed to have window washers inside, is swinging wildly out of control at the top of the tower. This is a very dangerous situation. Please avoid the area. Firefighters are working to access this now. BF 8:02 am. pic.twitter.com/JudRxmTMNv

Within 47 minutes, the department announced that the two individuals had been rescued, KOCO reported.

Pandemic-induced recession is over for the rich but not the poor, Oxfam report warns
Maine shifts some vaccine doses away from CVS and Walgreens
Pastor says addressing resistance to Biden administration is part of the job
Lawmakers outraged at images of National Guard sent from Capitol to parking garages
How working from home due to COVID could be a double tax hit for some
‘There is no plan B’ for Tokyo Olympics, IOC chief says