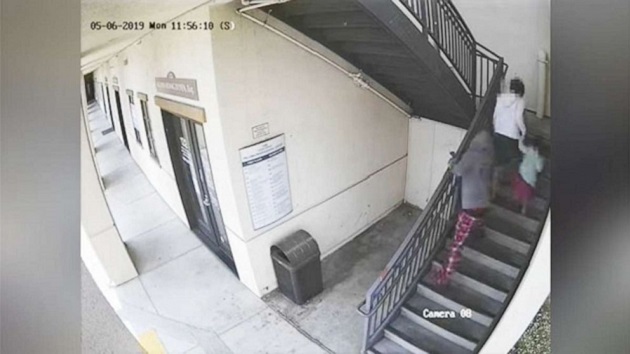 San Jose Police Department
Posted on May 15, 2019 by ABC News

(SAN JOSE, Calif.) — A man who was seen on surveillance video violently snatching a purse from a woman holding hands with her child on a stairwell has been arrested.The incident occurred on May 6 at an outdoor office building in San Jose, California, police said. Surveillance footage from the scene showed the victim walking up a flight of stairs with her young daughter in tow, according to police. The suspect is seen approaching from behind while talking on his cellphone. Moments later, he violently grabs the woman’s purse and subsequently drags her and the child down the stairs.Detectives were able to identify the suspect as 26-year-old Pablo Cabrera Jr. based upon the detailed description they were given, police said. Cabrera Jr. was later linked to other purse snatching robberies, according to police.Further investigation revealed all of his victims were Asian females who carried expensive purses, authorities said. In each case, Cabrera Jr. would approach them from behind, grab the purse and flee to his vehicle.Cabrera Jr. was taken into custody on Saturday at his home in San Jose, police said. At the time of his arrest, he was on parole for burglary, according to authorities.“We are fortunate this predator was caught before any more members of the public were victimized,” San Jose Police Department Chief Eddie Garcia wrote in a news release.Authorities did not reveal if the victims sustained serious injuries as a result of the robberies. Copyright © 2019, ABC Radio. All rights reserved.