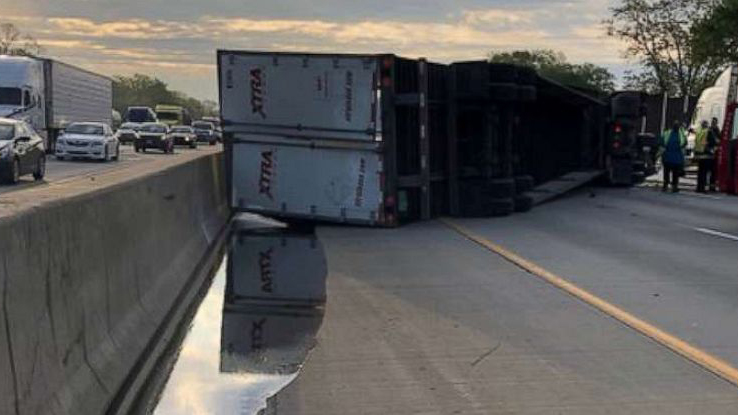 (INDIANAPOLIS) — An overturned semi-truck caused what the Indiana State Police are calling a “sticky situation” Wednesday when it spilled 20 tons of honey on Interstate 80/94.The spill closed down three lanes of traffic for several hours while crews worked to remove the truck and its payload of 41,000 pounds of amber honey.According to a press release from the Indiana State Police, the semi was traveling eastbound when its axle broke, causing the vehicle to roll over when its driver lost control.The truck’s 41,000 pounds of honey was being hauled in 13 containers. Five of the containers sheared through the trailer’s roof and fell out during the crash, with several of the containers leaking honey onto the roadway.In addition to the honey, the truck was leaking diesel fuel as it had just refueled.Indiana State Police urged commuters to avoid the area because of what they called “gawkers” slowing down to view the wreck from the opposite lanes.It’s not known how long the accident will take to clean up, but police expect it to be an extended cleanup and closure.

Hello again, Clarice! Jodie Foster and Anthony Hopkins reunite to celebrate ‘Silence of the Lambs” 30th anniversary
Democrats plan to launch impeachment trial by end of week, sources say
Biden’s pick for secretary of state lays out vision
Ice-T reflects on how he went from robbing banks as troubled youth to starring on ‘Law & Order: SVU’
Vin Diesel marks 20 years of ‘The Fast and the Furious’
The inequities of PPP: Megachurches, large corporations receive money ahead of small businesses