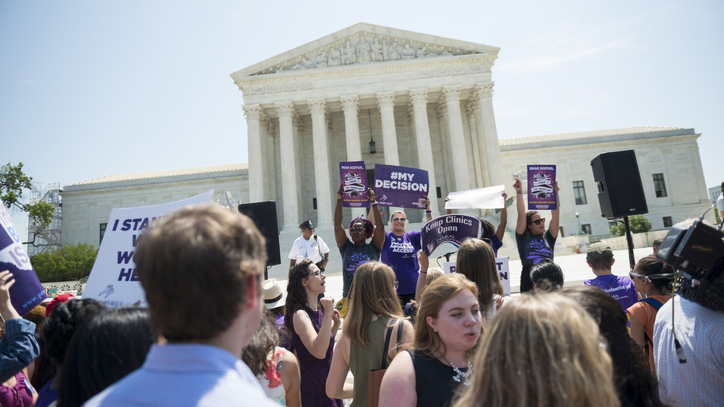 (MONTGOMERY, Ala.) — When the Alabama state Senate passed a controversial bill that would ban most abortions, not one of the four female state senators voted for it.The fact that there are only four female state senators in the Heart of Dixie comes as little surprise to political observers, as the state ranks among the lowest in terms of female representation in state legislatures.The same is true for Kentucky, Mississippi and Ohio, three of the four states that passed abortion bans or so-called “heartbeat” bills that aim to ban abortion after a fetal heartbeat is detected, which can be as soon as six weeks, at which point some women may not know they’re pregnant.Representation in politics has an impact on a number of topics, including abortion, where views may differ between men and women.Jean Sinzdak, associate director of the Center for American Women and Politics at Rutgers University, told ABC News when it comes to a whole range of policy issues, “research has shown that women legislators bring different perspectives. They bring their own life experience to bear on whatever the topic is, and they are more likely to bring marginalized voices into the policy conversation.””Abortion is an issue in which women on both sides of the aisle are particularly passionate, and they feel that they, as women, are best suited to speak to it because of its direct effect on women. However, it’s one those issues where it’s very clear that women are not monolithic and they feel very differently about what the solution is,” Sinzdak said.According to data compiled by the Center for American Women and Politics at Rutgers University, Alabama ranks 47th in terms of female representation, with 15.7% women in their state legislature on the whole.There are four women in the 35 seats in the state Senate and 18 women in the 105 seats in the House of Representatives.”We’re talking about 25 white men who just voted to make health and life decisions for women,” Dr. Leana Wen, the president of Planned Parenthood Federation of America, said during a call with reporters Wednesday.The proposed bans passed by state legislatures or signed into law so far this year have not gone into effect in any state and are facing various legal challenges.Ohio, which passed a so-called “heartbeat” ban in April, ranks 30th in gender representation, with just over a quarter — 26.2% — of their state legislature being women. Of the 33 seats in the Ohio state Senate, eight are held by women, and 27 of the 99 seats in the state’s House of Representatives are held by women.Kentucky, where the governor signed a “heartbeat” ban in March, ranks 41st in the country, with four women in their 38-seat Senate and 27 in the 100 seats in their House of Representatives.Coming in last place is Mississippi, where a 15-week abortion bill was deemed unconstitutional. There are nine women in Mississippi’s state Senate and 15 women in the 122 seats of their House of Representatives. That equates to women making up 13.8% of the Mississippi state Legislature.The only state that recently passed an abortion restriction that ranks in the top half of the country in gender representation is Georgia. They come in 20th place in CAWP’s rankings, with 15 women among the 56 state senators and 57 women in the 180-seat House.Gallup reports that in 2018, 31% of women and 27% of men felt abortion should be legal under any circumstances, while 46% of women and 54% of men reported feeling abortion should be legal under certain circumstances.Jeff Jones, a senior editor for Gallup, told ABC News the difference between opinions of men and women may not be as dramatic as some might expect because those stark contrasts tend to run along party lines, not gender lines.”Even though women are more Democratic than men, there are still 36% of women who are Republican or Republican leaning, so it’s not a monolithically Democratic group,” Jones said.Indeed, the Alabama House bill had a woman, Rep. Terri Collins, as its primary sponsor, and it’s awaiting the signature of a female governor. Both women are in the Republican Party.The Gallup data did not break down the preferences by state or region, but the Pew Research Center reported in 2014 that half of adults in most southern states believed abortion should be legal in all or most cases, while that number was about or more than half in other states.Specifically, the Pew data reported that 37% of adults in Alabama, 36% of adults in Kentucky and Mississippi, and 48% of adults in Georgia and Ohio believed it should be legal in all or most cases.”Generally speaking, women are better represented in places where there are more opportunities, so when you have a larger legislature, there’s literally more seats to run for,” Sinzdak said. “That helps, that definitely helps.”