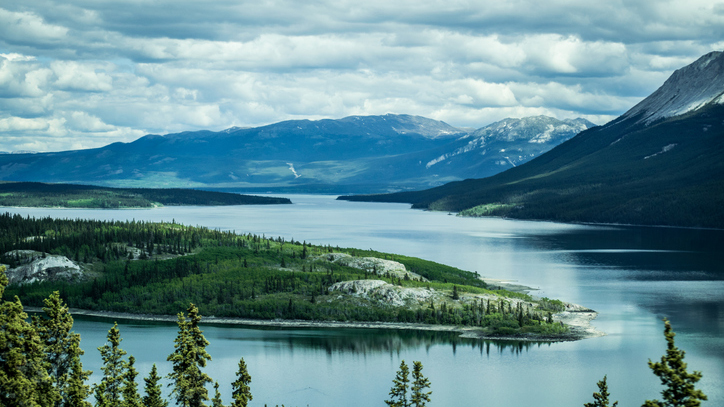 (ANCHORAGE, Alaska) — Six people died and 10 others were hospitalized after two aircraft collided in midair over Alaska on Monday, according to the U.S. Coast Guard.Alaska State Troopers confirmed the identities of the deceased after notifying their next of kin. They are:

The Canadian and Australian consulates have been notified, according to state troopers.As of early Tuesday, the search was ongoing for two travelers after four bodies had been recovered following the incident.”There are two people that we’re still searching for at this time,” Coast Guard Petty Officer Jon-Paul Rios told ABC News in an interview that aired Tuesday on Good Morning America. “Our crews are out there searching diligently alongside our partner agencies and some good Samaritans. They’ve been searching throughout the day, by both air and by sea.”The deadly collision took place Monday afternoon in Coon Cove, Alaska, according to the Federal Aviation Administration. A de Havilland DHC-2 Beaver with five people on board and a de-Havilland Otter DHC-3 carrying 11 people clashed in midair “under unknown circumstances,” the FAA said in a statement Monday.Ten people with injuries from the incident were taken to PeaceHealth Ketchikan Medical Center, according to hospital spokeswoman Mischa Chernick. Three of the patients were listed in serious condition, while seven were in fair condition, Chernick told ABC News.Both planes were on sightseeing tours, carrying guests from the Royal Princess cruise ship, which is on a seven-day voyage that departed Vancouver on May 11 and is scheduled to arrive in Anchorage on Saturday, according to Princess Cruise Lines.The aircraft collided approximately eight nautical miles from Ketchikan, Alaska.The two people who had been listed as missing, the Australian and the Canadian travelers, both were guests on the Royal Princess cruise ship, which has since departed the area and continued on its voyage, according to Princess Cruise Lines.”All of us at Princess Cruises are deeply saddened by this tragic news and we are extending our full support to the investigating authorities as well as the traveling companions of the guests involved,” Brian O’Connor, a spokesman for the cruise line, said in a statement Tuesday. “We immediately activated our Princess Care Team employees in the region and sent additional team members to Ketchikan overnight to assist the families impacted.”One of the planes was operated by Taquan Air, which said it has suspended all scheduled flights and is cooperating fully with investigators.”We are devastated by this news and our hearts go out to our passengers and their families,” the airline said in a statement Monday.The Coast Guard, the FAA and the National Transportation Safety Board are all investigating the incident.

Newborn giraffe dies when mother accidentally steps on its neck after giving birth
Kamala Harris set to resign from US Senate so she can preside over it
Sandy Twp Police: boat scam, crash with tractor-trailer, wallet stolen at Walmart
Six questions about Trump’s second impeachment trial answered, much still unknown
DC police officers speak out after US Capitol siege: ‘I thought … I might die’
NY passenger bus hangs off overpass in the Bronx after crash, at least 8 left injured