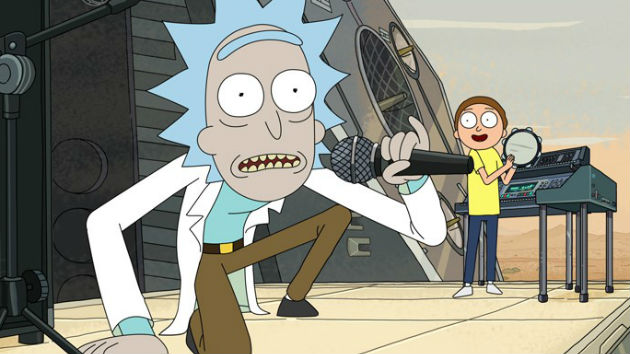 (NEW YORK) — In a brief, yet very informative clip that Adult Swim debuted Wednesday, the titular leads of Adult Swim’s acclaimed series Rick and Morty announced that the show’s anticipated fourth season will debut in November.

The announcement was part of the WarnerMedia upfronts presentation in New York City this morning.

In typically sarcastic R&M style, the two characters stand against a black background, and literally reveal only that information, for an audience that has been starving for new episodes.

For the uninitiated, Rick Sanchez is like Doc Brown from Back to the Future, if he was a genius sociopath with substance abuse issues, and Morty is his nervous grandson who gets dragged along on Rick’s often dangerous inter-dimensional adventures.

Both characters are voiced by series co-creator Justin Roiland; Community’s Dan Harmon is the show’s other co-creator. The series has already attracted a number of celebrity guest voices, from Stephen Colbert and Nathan Fillion to Susan Sarandon.

At the event, Roiland and Harmon offered apparent R&M fan Kanye West his “own episode.” Roiland told The Blast that “Ye is a “f***ing genius,” and a “kindred spirit,” with whom they’d both love to work.

“I’m giving him an episode,” Harmon said, referring to the series’ recent massive episode deal with Adult Swim. “We have 70! He can have one….It’s official.” Roiland gushed, “I’m so down.”