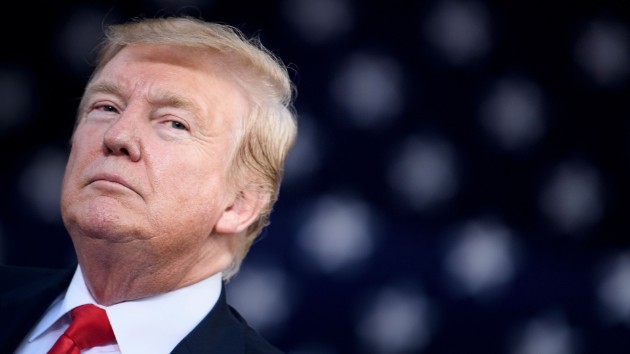 BRENDAN SMIALOWSKI/AFP/Getty Images
Posted on May 15, 2019 by ABC News

(HACKBERRY, La.) — In a taxpayer-funded event Tuesday that, at times, felt like a campaign rally, President Donald Trump took the stage to talk about energy, infrastructure and economic growth at a liquefied natural gas facility and also called out some of the Democrats running to take him on in 2020. The president talked about American energy independence in remarks delivered at the Cameron LNG export facility in Hackberry, Louisiana — a site that the administration said represents its efforts to ease “cumbersome regulations and streamline approvals for energy infrastructure projects.” “I just approved a lot of pipelines going through Texas and other places, including, as you know, the Keystone XL pipeline I approved,” he said to applause. “The Dakota Access pipeline. These were lines that were worked on for a long time, and they never would have happened. We did them, I think, in my first week. And it’s great. It’s great. And it’s clean and it’s environmentally better than the alternatives.”Trump promised that if he is re-elected, he would have a new Interstate 10 bridge built, a pledge that netted cheers. Infrastructure has been a rare area of potential bipartisan agreement with Democrats who last month called a meeting at the White House with Trump “constructive” and announced an agreement to spend $2 trillion to tackle U.S. infrastructure in a “big and bold way.”During his speech, the president also turned his attention to wind energy and said that while it’s illegal to kill a bald eagle, windmills are killing birds en masse.”You want to see a bird cemetery? Go under a windmill,” Trump said, noting it is “not a good situation.”Since 2012, Trump has referred to windmills at least 75 times in speeches, remarks, tweets and interviews, according to the data aggregation site “Factbase.”Trump also railed against “radical activists” who are trying to hurt the oil industry and told the LNG workers that they are all “patriots.”The president also turned to the 2020 election and the crowded Democratic field.”Beto is falling fast!” he said of former Rep. Beto O’Rourke, D-Texas, whose representation in some polls have indicated that his early advantage has slipped of late.”I don’t know what happened to Biden!” he said of former Vice President Joe Biden.”Bernie’s crazy! He’s got a lot of energy he’s got the energy to get rid of your jobs,” he said of Sen. Bernie Sanders, I-Vt.”Pocahontas is probably out,” he said of Sen. Elizabeth Warren, D-Mass.On his way to the liquefied natural gas facility, four local police officers were involved in an accident on their motorcycles in Trump’s motorcade. Three of the four had minor injuries and were treated at a hospital, according to the U.S. Secret Service and a statement from the White House. The accident did not impede the motorcade.The president’s visit to Louisiana also included a fundraiser at a private residence in Metairie and a roundtable discussion with supporters.Copyright © 2019, ABC Radio. All rights reserved.

Pastor says addressing resistance to Biden administration is part of the job
Trump impeachment article to be sent to Senate Monday, triggering trial
Indoor dining set to reopen in Chicago, Baltimore as NYC, Los Angeles await answers
Biden administration to pause most ICE deportations, among other immigration policy shifts
‘Game of Thrones’ prequel, ‘Tales of Dunk and Egg’, in the works at HBO
For GOP firebrand Rep. Lauren Boebert, anger and suspicion linger after Capitol riot