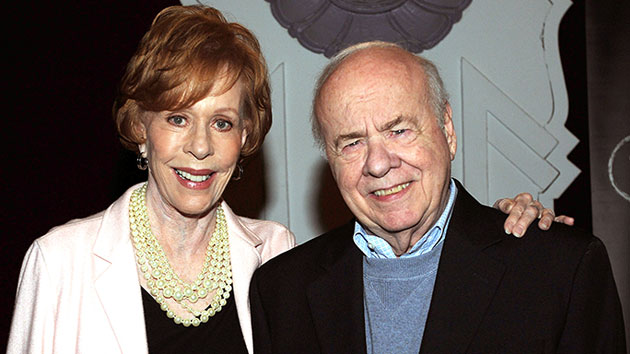 Carol Burnett and Tim Conway in 2013; Joshua Blanchard/WireImage
Posted on May 15, 2019 by ABC News

(NEW YORK) — After news of The Carol Burnett Show and McHale’s Navy star Tim Conway’s death on Tuesday, tributes from celebrities, including Burnett, have been pouring in.

Burnett said in a statement Tuesday: “I’m heartbroken. He was one in a million, not only as a brilliant comedian but as a loving human being. I cherish the times we had together both on the screen and off. He’ll be in my heart forever.”

“Hysterical, crazy, bold, fearless, humble, kind, adorable — all synonyms for Tim Conway,” a rep for Vicki Lawrence told Closer Weekly in a statement. “I am so lucky to ever have shared a stage with him. Harvey [Korman] and Tim are together again [and] the angels are laughing out loud tonight.”  Lawrence starred with Conway on The Carol Burnett Show, along with the late Harvey Korman.

Others also took to social media to honor the late actor and comedy legend:

Bob Newhart — We lost one of the greatest today — Tim Conway may be the greatest ever! I will never forget on an Emmy Awards when Harvey Korman won & Tim did not. Harvey went up to accept his award, Tim went up and stood right next to him, not saying a word. Ginnie & I will miss him greatly!!

Along with a clip of Conway cracking up his The Carol Burnett Show co-stars, actor and comic Patton Oswalt wrote, “Watching Tim Conway destroy his cast mates is pure joy. Wait until Vicki Lawrence’s a-bomb ad-lib at the end.”

Richard Lewis — “RIP Master. I was honored to make you laugh and be a friend. As I spoke at Harvey Korman’s memorial that you oversaw, I said that without question, your work together was right next to Laurel & Hardy in craft and laughs.”

Jamie Lee Curtis — “Tim Conway made me laugh. A great gift and talent. Carol, my friend, my hand in yours as you miss him.”

Billy Eichner — “I used to laugh til I cried watching the great Tim Conway. What a seriously funny man. RIP.”

The official Twitter page of SpongeBob SquarePants, on which Conway voiced the character Barnacle Boy — the sidekick to his McHale’s Navy co-star Ernest Borgnine’s hero, Mermaid Man — posted, “We are sad to learn Tim Conway, the legendary voice of Barnacle Boy, has passed away. Thank you for everything you contributed to Bikini Bottom.”

Conway passed away at the age of 85 in Los Angeles due to hydrocephalus, commonly known as water on the brain.