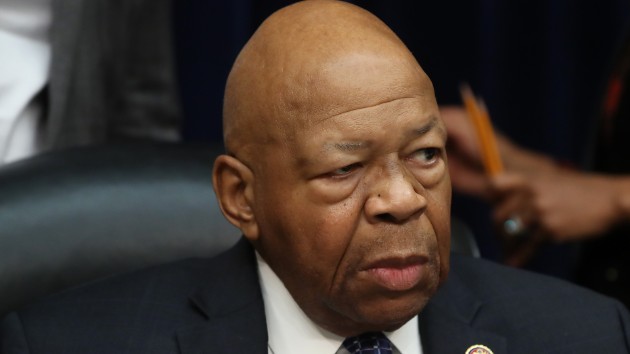 (WASHINGTON) — The first judicial square-off over subpoenas between President Donald Trump and House Democrats is expected to take place in D.C. District court Tuesday where a judge is set to hear arguments on a lawsuit brought by the Trump Organization against Democratic House Oversight Committee Chairman Elijah Cummings. The Trump Organization filed the suit against Cummings in his official capacity as chairman of the House Oversight Committee in April, seeking relief from the subpoena that the committee issued to Trump’s accounting firm seeking 10 years worth of the president’s financial records.“The Democrat Party, with its newfound control of the U.S. House of Representatives, has declared all-out political war against President Donald J. Trump. Subpoenas are their weapon of choice,” read a complaint filed by Trump’s attorneys in April. “House Democrats are singularly obsessed with finding something they can use to damage the President politically.”In response, Cummings accused the president of “unprecedented stonewalling” and said he has yet to produce “a single document or witness” to his committee.”The President has a long history of trying to use baseless lawsuits to attack his adversaries, but there is simply no valid legal basis to interfere with this duly authorized subpoena from Congress,” Cummings said in a statement Monday. “This complaint reads more like political talking points than a reasoned legal brief, and it contains a litany of inaccurate information.”The original subpoena had required Trump’s accounting firm, Mazars USA, to turn documents over to the oversight committee by April 29. The deadline was moved until after the judge in Tuesday’s case could rule.The judge in the case, Judge Amit P. Mehta, agreed to fast-track proceedings in the case and intends to rule on the case from the bench Tuesday. Attorneys for Trump argued against Mehta’s decision to expedite the case Monday arguing that the expedited proceeding denies them “reasonable time to adequately prepare for a trial that will finally decide their entire case.”But attorneys representing the Oversight Committee said in a filing Monday that they agreed with the judge’s choice to move forward with an expedited decision, noting that “expeditious resolution of the subpoena’s validity is necessary for the Committee’s investigation to continue.”Mehta is an Obama-appointed judge who’s no stranger to House Oversight requests for information. In August 2018, Mehta denied a request from House Democrats to get Trump Hotel Records from the General Service Administration, ruling that the Democrats who were at the time a minority party in the house did not have standing.A spokesperson for Mazars USA, which was named as a defendant in the case, confirmed receipt of the lawsuit and said in late April that the firm “will respect this process and will comply with all legal obligations.”Cummings first served the subpoena in early April in an effort to corroborate elements of Trump’s former personal attorney Michael Cohen’s testimony before the committee.This is the first of potentially many subpoena disputes that could be headed to the courts in the coming months as House Democrats ramp up their investigations into the Trump administration. The White House has signaled it’s intention not to comply with several subpoenas issued by House Democrats.Copyright © 2019, ABC Radio. All rights reserved.

Elliot Page and Emma Portner announce divorce after three years of marriage
Watch now: Action and joke-packed trailer for Disney’s animated ‘Raya and the Last Dragon’
Vanessa Bryant remembers Kobe and Gianna on one-year anniversary of their deaths
What to know about the link between mental health and heart disease
Woman loses 115 pounds, leads organization that gets Black women running
Biden’s 1st 100 days live updates: Senators to be sworn in for Trump impeachment trial