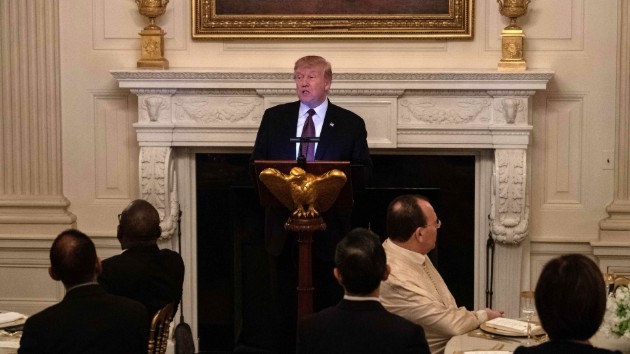 NICHOLAS KAMM/AFP/Getty Images
Posted on May 14, 2019 by ABC News

(WASHINGTON) — President Donald Trump hosted his second annual iftar dinner Monday night at the White House and said it’s “been a very rough time” for Muslims around the world. The dinner, which breaks the daily fast of Ramadan for Muslims around the world, was attended by various Muslim diplomatic leaders. He cited the devastating attacks on Muslims killed in New Zealand, Sri Lanka, California and Pittsburgh. “In their blessed memory, we resolve to defeat the evils of terrorism,” he said.Trump’s speech Monday night emphasized world peace.”We thank god that America is a place founded on beliefs that citizens of all faiths can live together in safety and live together in freedom,” he said.And then he ended his address with a Muslim blessing, “Wish all the people around the world Ramadan Kareem.”His tone Monday night was a shift from previous occasions.Earlier in the day, Trump joined top House Republicans in attacking Rep. Rashida Tlaib, D-Mich., for her recent comments on the Holocaust and Israel.”Democrat Rep. Tlaib is being slammed for her horrible and highly insensitive statement on the Holocaust,” Trump said in a tweet. “She obviously has tremendous hatred of Israel and the Jewish people. Can you imagine what would happen if I ever said what she said, and says?”In an interview Saturday on Yahoo’s podcast “Skullduggery,” Tlaib, one of the first two Muslim women in Congress, spoke about her support for a one-state solution to the Israeli-Palestinian conflict. Tlaib fought back on Monday saying Trump and top-ranking GOP lawmakers had deliberately misconstrued her words to “spread falsehoods rooted in hate.”During his presidential campaign, Trump called for a “complete and total shutdown” of Muslims entering the United States. And in June 2018, the Supreme Court ruled that a travel ban is “squarely within” the president’s authority. The third iteration came after two previous attempts by the administration to bar immigration to the United States from certain foreign countries had been blocked.And last month, Trump rebuked Rep. Ilhan Omar, D-Minn., over remarks she made about Israel and its American supporters at a Council on American-Islamic Relations event.Omar, who was elected alongside Tlaib as the first women Muslim members of Congress in U.S. history, continues to speak out against Israel, attracting the scorn of Republicans and Democratic colleagues alike.She responded to Trump on Twitter.”No one person — no matter how corrupt, inept, or vicious — can threaten my unwavering love for America,” she wrote, without naming Trump directly. “Thank you for standing with me — against an administration that ran on banning Muslims from this country — to fight for the America we all deserve.” Copyright © 2019, ABC Radio. All rights reserved.