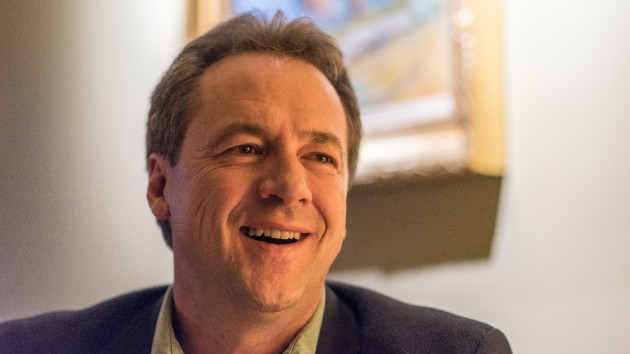 William Campbell-Corbis via Getty Images
Posted on May 14, 2019 by ABC News

(NEW YORK) — Montana Gov. Steve Bullock, the 22nd Democratic presidential hopeful, announced his decision Tuesday morning to join the vast field of 2020 candidates vying for voters’ attention. And he claims he’ll fill a role no one else does.He is the only Democratic candidate who was on the ballot alongside then-candidate Donald Trump and won. In other words, though Montana voted handily to elect President Donald Trump in 2016, it also voted for a Democratic governor, Bullock.”As a Democratic governor in a state Trump won by 20 points, I don’t have the luxury of only talking to people who agree with me,” Bullock said in his announcement video posted Tuesday morning. “I go all across our state’s 147 thousand square miles and look for common ground to get things done.”In fact, all three of Bullock’s statewide election victories took place during a presidential election where Montana voters turned out in support for the top Republican nominee on the ticket.Bullock is not the only candidate, however, who hails from a state that voted for Trump.Of the major candidates, there are several who check that box: Mayor Pete Buttigieg is from Indiana; Rep. Tim Ryan is from Ohio; and former Rep. Beto O’Rourke and former Obama cabinet official Julián Castro are from Texas.Minnesota Sen. Amy Klobuchar, though her state narrowly voted for Democrat Hillary Clinton in 2016, is also part of that conversation because of her ability to win counties that went to Trump.So how will Bullock set himself apart?A key focus on Bullock’s campaign will be on his successful record as a Democrat in a largely Republican state — including expanding Medicaid to adults making less than around $17,000 a year, which dramatically reduced Montana’s uninsured rate, and support for abortion rights in an era when many Republican states are moving forward with restrictive laws.But a key focus of Bullock’s announcement video was on his fight to upset the hold of “dark money” on politics.”Today we see evidence of a corrupt system all across America — a government that serves campaign money, not the people,” Bullock said in his announcement video.That, too, might sound familiar. Both Sens. Bernie Sanders of Vermont and Elizabeth Warren of Massachusetts have championed anti-corruption platforms.But Bullock, who is quicker to mention his bipartisan work across Montana than he is to align with the progressive tilt of the Democratic Party, has a unique connection that dates back to a case he argued before the Supreme Court — one that spurred his bid for the governor’s mansion.As attorney general for Montana at the time Citizens United v. FEC was decided, Bullock fought to uphold the state’s age-old laws, which were established in 1912 to protect local politics from the money coming in from the state’s copper boom.It was the only state not to change its laws to align with the Citizens United decision in 2010.Bullock eventually lost that fight in the Supreme Court, but soon after decided to run for the governor’s seat. During his first term, his administration introduced some of the strictest campaign finance laws in the nation.”I believe in an America where every child has a fair shot to do better than their parents. But we all know that that kind of opportunity no longer exists for most people and for far too many, it never has,” Bullock said in his announcement video Tuesday.”That’s why we need to defeat Donald Trump in 2020 and defeat the corrupt system that lets campaign money drown out the people’s voice — so we can finally make good on the promise of a fair shot for everyone,” the governor said.The governor will launch his campaign with a speech at his alma mater, Helena High School, in Helena, Montana on Monday afternoon before kicking off a three-day tour through Iowa.