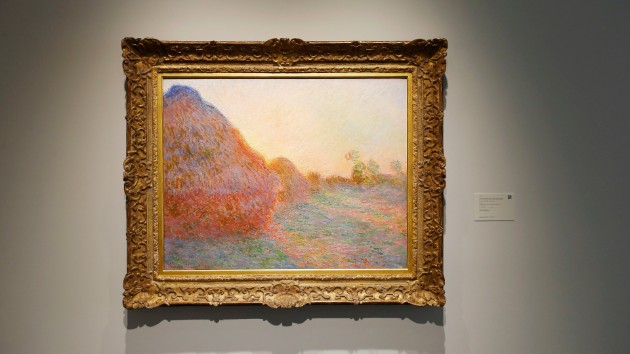 John Lamparski/Getty Images
Posted on May 14, 2019 by ABC News

(NEW YORK) — One of Claude Monet’s most iconic paintings is expected to garner in excess of $55 million at an auction Tuesday evening.Monet’s 1890 oil-on-canvas masterpiece “Meules,” perhaps the most revered painting from his “Haystacks” series, is leading a private collection of impressionist paintings, according to Sotheby’s. Other artists in the collection for sale include Pierre Bonnard, Edouard Manet, Camille Pisarro, Pierre-August Renoir, Paul Signac, Alfred Sisley and Edouard Vuillard.”Meules” depicts “gigantic conical structures,” composed of wheat or grain, stacked in such a way to allow the stalks to dry and prevent mold, according to Sotheby’s. The stacks depicted in the painting show stores for wheat and grain, despite the “popular misconception” that it was for hay, according to a description for the piece by the auction house.”Meules” is one of four of the 25 canvases in the series to come to auction this century and one of eight remaining in private collections, according to Sotheby’s. Six of the remaining 17 pieces reside at the Art Institute in Chicago, while the Metropolitan Museum of Art in New York and the Musee d’Orsay in Paris contain others from the series.It was with the haystacks series that Monet began exploring with the “varying effects of light and atmosphere on a single subject over the course of time,” said Brooke Lampley, vice chairman of Sotheby’s fine art division.”It is these ‘series’ pictures of haystacks, the Rouen Cathedral, and water lilies in Giverny that would eventually come to define his immense contribution to not only Impressionism, but also Abstraction and 20th century art,” Lampley said in a statement, adding that the painting showcases Monet as “an unparalleled landscape painter” and “a radically innovative conceptual artist.”The Chicago socialites who initially acquired “Meules,” Potter Palmer and Bertha Palmer, obtained the work directly from Monet’s dealer in the 1980s, according to Sotheby’s. The painting remained in the same private collection until it was sold at auction in 1986 to its present owners.Bertha Palmer owned nearly 90 works by Monet over the course of her life, including six of the artist’s grainstack canvases, according to Sotheby’s.On May 3, Meules was placed on public view for the first time in more than 30 years, at the Sotheby’s York Avenue gallery.August Uribe, head of Sotheby’s impressionist and modern art department in New York, described Meules as “one of Claude Monet’s defining Impressionist paintings” and “one of the most recognizable images in art history.””Monet’s Haystacks series has long served as an inspiration to countless artists since its creation in the early 1890s, and continues to inspire anyone who has viewed one of these canvases first hand,” Uribe said in a statement. Copyright © 2019, ABC Radio. All rights reserved.