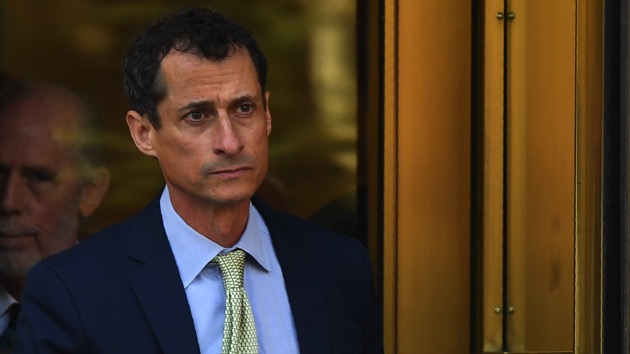 (NEW YORK) —  Disgraced former Congressman Anthony Weiner left a halfway house in the Bronx Tuesday morning, bringing his sentence for exchanging lewd text messages with an underage girl to a conclusion.”It’s good to be out,” Weiner told reporters as he left. “I hope to get back to my family and make up for some lost time. I hope to be able to live a life of integrity and service and I’m glad this chapter of my life is behind me.”Weiner will be required to check in with his probation officer and register as a sex offender. He pleaded guilty in May 2017 to sending the obscene messages to a 15-year-old girl in North Carolina, and was sentenced in September 2017 to 21 months in prison.The a case brushed up against the 2016 presidential election when FBI agents examined a laptop that belonged to Weiner’s then-wife Huma Abedin — who had been a longtime aide to Hillary Clinton — and found potentially sensitive messages from Clinton’s private server.Weiner spent time at Federal Medical Center-Devens in Massachusetts before he was transferred to the halfway house in February to serve the remaining time of his sentence. He had three months shaved off due to good behavior, but will remain on probation.In an emotional statement when he entered his guilty plea in 2017, Weiner said he “compulsively sought attention from women,” engaging many of them in sexual and non-sexual conversations. He said his behavior started when he entered Congress and it continued through the first six months of 2016.”These destructive impulses brought great devastation to my family and friends, and destroyed my life’s dream of public service,” Weiner said.He said that he “came to grips for the first time with the depths of my sickness” last fall, and entered “intensive treatment.””I have a sickness,” Weiner said, “but I do not have an excuse.”Abedin, who shares a son with Weiner, filed for divorce the same day that he pleaded guilty. However, she announced that they were separating months earlier, in late August 2016, when the messages to the teen were first reported.Copyright © 2019, ABC Radio. All rights reserved.